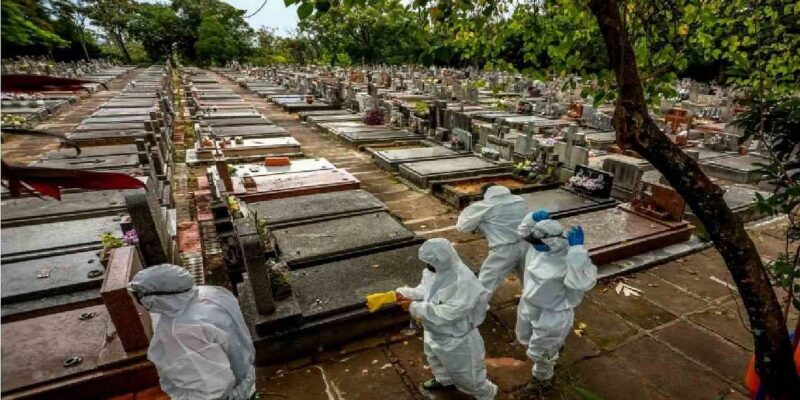 The number of people who lost their lives due to Coronavirus in Brazil has exceeded 6,00,000. Brazil is the second such country in the world, where the number of corona dead (Covid Death in Brazil) is more than six lakhs. Earlier, this unfortunate figure was crossed in America. This has happened at a time when the Brazilian government is being criticized for not handling the epidemic properly. On the other hand, President Jair Bolsonaro has lashed out at health experts for their failure to implement measures to contain the pandemic.

Bolsonaro has raised his voice against the lockdown, raised doubts about the vaccine and refused to wear a mask in public. Due to these antics of the President, he has been criticized both in the country and abroad. But even after such a large number of corona dead on Friday, there are indications that the infection in Brazil is finally decreasing. This is because vaccination has started gaining momentum after a slow start in the country. In Brazil, 70 percent of the people have been given the first dose of the vaccine.

Alexandre Naim Barbosa, head of epidemiology at So Paulo State University, said the non-vaccine rate is actually very low, it could irritate other countries. This is very important for Brazil, because through this the epidemic can be prevented from spreading. Looking at the recent situation in Brazil, it seems that the country has also escaped the outbreak of Delta Variant of Corona, as there is a decline in the number of new cases and corona deaths. Whereas the Delta variant had knocked here long back. In such a situation, there was a possibility of a big outbreak.

Because of this, Brazil was saved from the wrath of the Delta

In April, three thousand people were dying every day in Brazil at the peak of Corona, but now it has come down by 80 percent. Brazil no longer has the highest daily death rate in the world. The Health Ministry recorded 615 COVID-19 deaths on Friday. In this way, after the start of the epidemic, the total number of dead increased to 6,00,425. Health experts estimate that the delta variant did not have much effect due to the initial infection caused by the gamma variant in Brazil. Due to the gamma variant, the immunity among the people would have increased.

Also read: Crisis deepens in Britain! Millions of Britons are unable to buy essential food items, shocking results came out in the survey

After El Salvador, now Brazil is also preparing to make Bitcoin a currency!

This small plate was auctioned for 13 crores, know what is special in it, which bid so much