New ‘mystery bowler’ came in IPL, ‘Lucky Charm’ made for MI, dangerous pair formed with this off-spinner, rest teams should be careful! 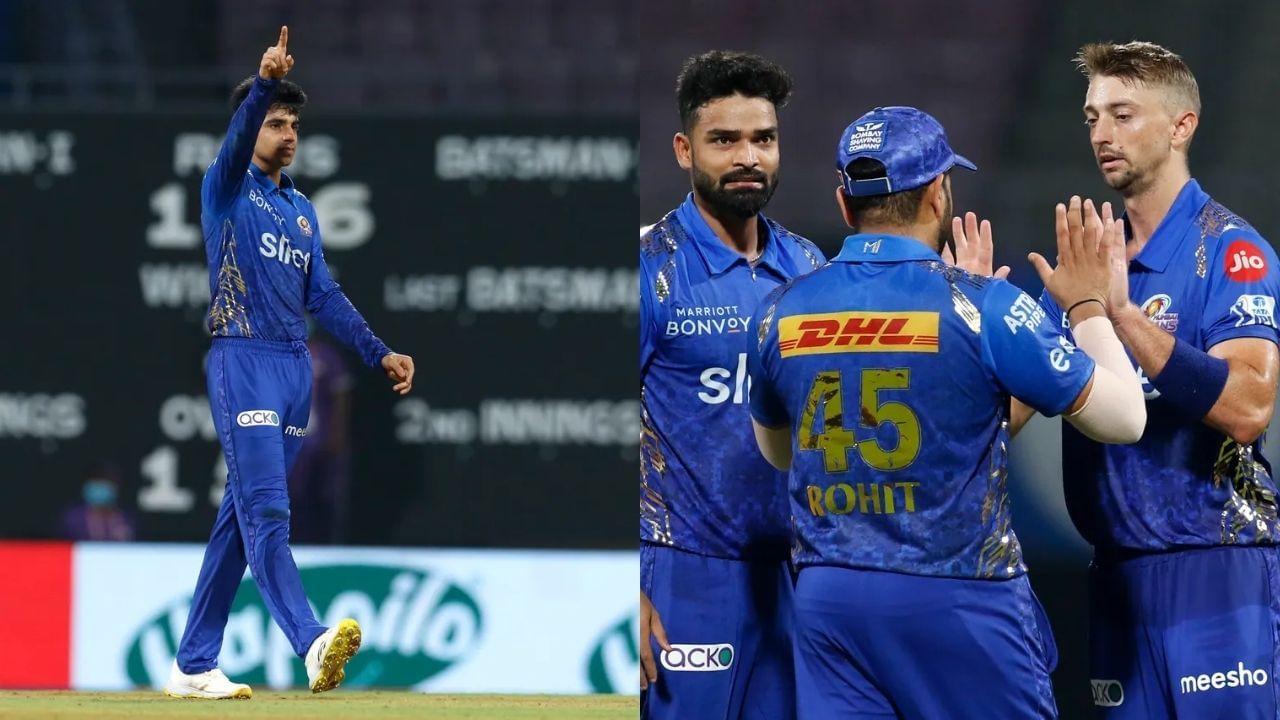 These two spinners of Mumbai had bowled strong against Rajasthan. (IPL Photo)

Mumbai Indians opened their winning account in IPL 2022 by defeating Rajasthan and in this match this spin pair has given new hope to the team.

Mumbai Indians (Mumbai Indians) The performance was expected from IPL-2022 (IPL 2022) I could not show that kind of game to the team. After suffering eight consecutive defeats, the account of Mumbai’s victory opened against Rajasthan Royals last night. Mumbai’s bowling also went on in this match and its batting too. Rajasthan batted first and scored 158 runs in 20 overs for the loss of six wickets. Mumbai bowlers did not allow Rajasthan to score big. During this, two bowlers of Mumbai have impressed a lot. These two are off-spinners Hrithik Shokin and Kartikeya Singh (Hritik Shokeen and Kumar Kartikeya ,, Both of them have raised hopes of taking charge of Mumbai’s spin bowling attack.

Mumbai does not have any frontline spinners this season. Rahul Chahar was with the team till last season but this season he moved to Punjab Kings. At the same time, Mumbai could not keep Krunal Pandya with them and he is playing with the team of Lucknow Super Giants this season. Mumbai tried Murugan Ashwin and Mayank Markande but both could not impress.

Karthikeya made his IPL debut against Rajasthan on Saturday. This spinner has played eight matches for Madhya Pradesh so far. Karthikeya is successful in taking a wicket on the second ball of his very first IPL match. He brought the eighth over and took the wicket of Rajasthan captain Sanju Samson. After this, although Karthikeya could not take wickets but he kept the Rajasthan batsmen tied. In four overs of his quota, he gave only 19 runs and took one wicket. During this, the way Karthikeya bowled gave relief to Mumbai. Apart from the traditional chinaman bowling, Karthikeya has variations and he also gives good flight to the ball. Apart from leg spin, googly, he also hits straight balls in between.

It can be difficult for the batsmen to understand his variations. Also, another thing that has impressed Karthikeya is his confidence. Former New Zealand spinner Daniel Vettori said about Karthikeya, “It took seven balls to understand what he was bowling. He does everything with the left hand. Leg Spin, Seam Bowling, Carrom Ball. The batsmen kept on understanding their balls. The batsmen were waiting for his bad ball. Both Mitchell and Butler got into a lot of trouble.”

When Shaukeen brought the 16th over, Joss Butler was caught and the England batsman hit him for four consecutive sixes. But this bowler did not lose courage and trapped Butler in his net on the last ball. But apart from this, Shaukin also impressed with his bowling. He is a young bowler and in such a situation, such beating in front of a stormy batsman like Butler is common. With time, he will get better, and if he becomes more mature, then he can do wonders for Mumbai. Against Rajasthan, he bowled three overs and managed to take two wickets for 47 runs. In the two matches played before this, Shaukin did not get a single wicket but she was economical. He gave 11 runs in two overs against Lucknow. Earlier, against Chennai Super Kings, he gave 23 runs in four overs.


Regarding Shaukin, Vettori said, “The seam position he has is not easy. Due to this there is a drift in his bowling and the ball spins more. That’s why it troubles the bowlers, not only the left-handed batsman but also the other batsmen. Also he can bat as well.