EXCLUSIVE: Before the start of Ranji Trophy, the Bihar captain gave answers to the burning questions, said a big thing about Dhoni 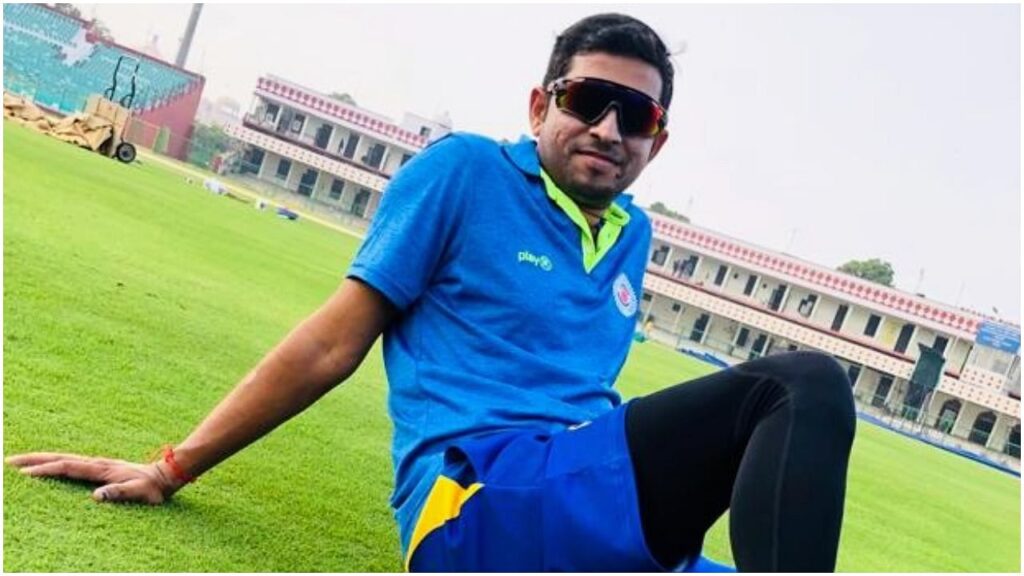 Ashutosh Aman, the captain of the Bihar Ranji team, had a candid conversation with NewsNCR Hindi. He told which team he would like to play in IPL 2022.

BCCI Ranji Trophy (Ranji Trophy) The start has been stamped. There is a wave of happiness among the domestic cricketers due to this news. Those moments of happiness were shared by Ashutosh Aman, the captain of the Bihar Ranji team. NewsNCR Hindi shared with. In addition he IPL 2022 And also talked about the cricket situation in Bihar. Left arm spinner Ashutosh Aman (Ashutosh Aman) He holds the record for taking most 68 wickets in a single Ranji season. In this case, he broke the record of Bishan Singh Bedi. In such a situation, now he also revealed what other new places he aspires to touch. Here is the full excerpt from the conversation with Ashutosh Aman.

Question- Ranji Trophy is going to start. Your first reaction to this news?

Ashutosh- This is very good news for all Ranji playing and domestic cricketers. We were expecting this tournament to happen. Many thanks to BCCI for finding a middle ground in the midst of such a difficult situation and such a hectic schedule and Ranji Trophy is happening.

Question- Ranji Trophy was not played last year due to Corona. This time it’s going to happen. In such a situation, how was the era of professional cricket during this period?

Ashutosh- Last year there was white ball cricket, due to which our association with professional cricket continued even after the Ranji Trophy was not there. It was expected that the Ranji season would also be played. All of us players were in touch with each other and were making our preparations.

Question- What inspired you to become a cricketer in a small town like Gaya in Bihar?

Ashutosh- I loved cricket since childhood. However, Gaya did not have that many opportunities and resources then. But, I had the urge to play this game, which grew even more after watching Sachin Tendulkar play on TV. Be it the roof of the house, the street or the ground – I used to play cricket wherever I got a chance.

Question- Dhoni’s influence is seen on the cricketers of Bihar-Jharkhand. As the captain of Team India, Dhoni made his own identity. You are also the captain of Bihar Ranji team. You must have also met Dhoni. Did you get to learn anything?

Ashutosh- I have met Dhoni 2-3 times. He is a very simple person. He also explains things in such a simple way. During this, his words are also very inspirational. He will always be a role model for the cricketers of Bihar-Jharkhand. How to handle pressure and how not to let success get you down is a big thing for me to learn from him.

Question- What is different in Bihar cricket and what kind of players can emerge from there in the coming time?

Ashutosh- What sets Bihar cricket apart is the abundance of cricketers with excellent skills. The state has a huge pool of talented cricketers. You must have seen that Bihar players from many other states like Jharkhand, Bengal are playing cricket and also performing well. There is a need to improve the infrastructure and ground level for cricket in the state. Bihar Cricket Board is also working in this direction. In the coming 2-3 years, you will see that not only will the standard of Bihar cricket be high, but some good players will emerge from there.

Question- You have broken the record of Bishan Singh Bedi. What other records do you aspire to break in the future?

Ashutosh- Look, I or any other cricketer doesn’t play for records. He plays match by match player. In every match, it comes thinking that give your best and win for the team. So there is no such record in my mind to break further. It’s just that I should perform well. May my team win and be the name of Bihar.

Question- IPL 2022 is going to start. If given a chance, which team would you like to play for?

Ashutosh- This time there are 10 teams in IPL. All the teams are good. I would love to play for that team whichever chance I get. My effort will just be on performing better for that team. Will have to gain experience by joining him.

Question- Still, if you want to know the name of that one IPL team, with which you would like to play, which would it be and why?

Ashutosh- I would love to play for Delhi Capitals. This is because I have been playing cricket in Delhi for 15 years. I know the players here. Here the situation, mood, location are all well known.

Ashutosh- See, most of the batsmen are right handed. In such a situation, he finds it difficult to play against left-arm spinners. The same thing is with the left arm medium pacer as well. The ball comes from a different angle, which the batsmen do not practice and because of this problems arise. However, in today’s cricket all is equal. So many facilities and techniques have come for preparation that there is not much difference.

Question- Do you think that if Bihar cricket had got recognition a little earlier, then your career would have been in some other direction as well?

Ashutosh- An entire generation of cricket in Bihar has been marginalized due to the late recognition of Ranji Trophy. Mine and many of my seniors in Bihar whom I know, who were amazing cricketers, could not make a mark for not playing in the Ranji Trophy. So it is obvious that if the recognition had been received earlier, then there would have been a few more chances to prove themselves.

Question- What would have happened if Ashutosh Aman was not a cricketer?

Ashutosh- Had I not been playing cricket, I would have been doing agriculture in my village. I like to do new experiments in agriculture.

Question- You have played with many players in Bihar-Jharkhand. If I wanted to know from you the name of any one batsman, bowler whose game you were impressed by, whose name would you like to take?

Ashutosh- If I take the name of the batsman in Bihar-Jharkhand cricket, it is Ishan Kishan, against whom it is not easy to bowl. Especially not for the left arm spinner at all. And, in the bowler I would like to name Shahbaz Nadeem, whom I learn by watching him play and like to know more and more about bowling from him.

Also read: So far 26 bowlers have taken hat-trick in T20 International, but only these 4 players have done wonders of taking 4 wickets in 4 balls.