During the LIVE match, there were bullets fired, players were seen running, 3 people including a female spectator injured VIDEO 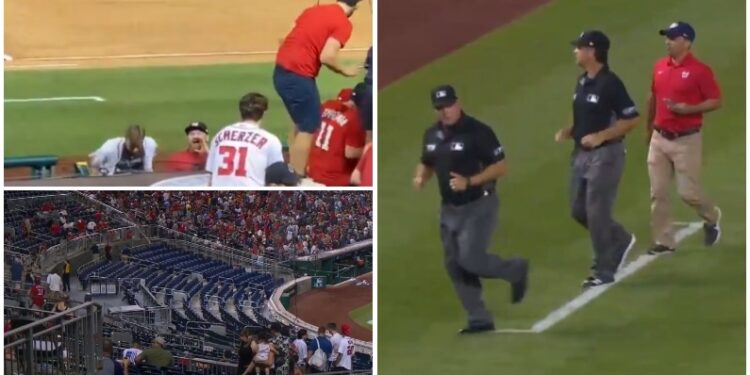 The spectators sitting in the stadium were in panic due to the firing. At first, he was asked by the officials to sit in the stadium itself. But then he was pulled out through two routes.

The match was called off after a shootout outside the stadium

The contest was on. The noise of the spectators in the stadium was loud. On the field, two teams were trying every trick to beat each other, that’s when some such sounds started coming which caught everyone’s attention. This sound was that of a bullet emanating from the gun. During the baseball match being played in America, there were many rounds of firing, the sound of which shook from the players to the spectators.

A baseball match is of 9 innings. But this match played on Saturday night in America was still in its sixth inning that only then the firing started. The sound of gunshots was coming from outside the stadium but its effect was visible inside the ground. When the players were seen running away from the field in fear, there was tremendous fear in the audience as well.

You can hear the gunshots just as the broadcast cuts away pic.twitter.com/tBmbZaR3GB

BREAKING: Reports of an active shooter outside Nationals Park in Washington DC.

Stadium security is telling fans to stay inside the stadium and take cover. pic.twitter.com/b6k8iZ2A9A

Something going on outside @Nationals park causing everyone to freak out in here. pic.twitter.com/obXuaCwMA5

The spectators were taken out from the 2 gates of the stadium.

In a late night press conference, the police said that this incident was the result of firing between two people in the vehicle. Earlier, the incident was also confirmed by Washington Nationals. The spectators sitting in the stadium were also in a terrible panic due to the firing. At first, he was asked by the officials to sit in the stadium itself. But then he was asked to exit the two lanes of the stadium, Centerfield Gate and Rightfield Gate.

It was earlier told by the police that two people were injured in this firing outside the stadium. Then he also mentioned the third person, who was a woman who had come to watch the match and had gone outside the stadium for some work during that time. Police said that the woman was also shot. The good thing is that the woman is fine now. While the remaining 2 people are being treated in the hospital. Taking action on the matter in the police, one of the two vehicles has been confiscated. While the search for another is on.

Nationals team was trailing 8-4 in the match when the game was stopped due to firing. The organizers have now said that this game will be played from here on Sunday.

Also read: Olympics 2020: 9 Indians who reached Tokyo to write the story of medal with a punch, have prepared to create history in Italy