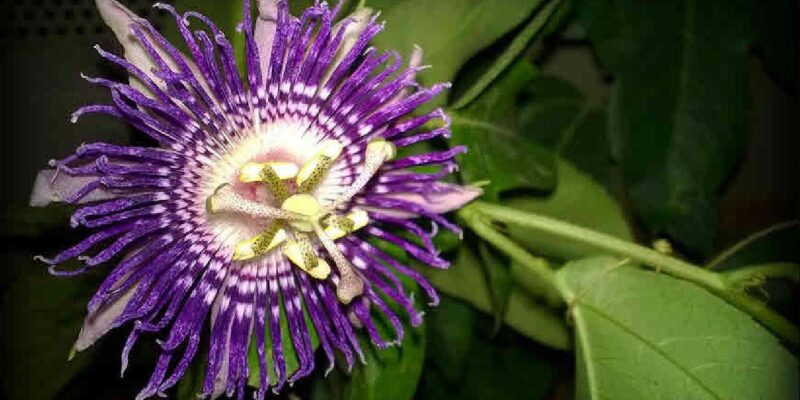 Krishna lotus is considered one of the most beautiful flowers in the world. It is also called passion flower in English. Apart from this, people also know it by the name of Rakhi Bell. Krishna lotus is of many colors like purple, red, white. This flower on the creeper has great importance in Hindu religion. There are more than 500 species of this flower. This flower is very beautiful as well as due to religious beliefs people like to plant it in their house.

The characters of Mahabharata are covered in flowers

Seeing the shape of the flower, it is said that all the important characters of Mahabharata are contained in this flower. A closer look at the flower structure reveals that the outer petals which are purple, red or white are 100 in number which are called Kauravas. There are five buds on it which are called Pandavas, along with five more buds on the top which are considered as the symbol of Brahma-Vishnu-Mahesh and those who are seated in the center are considered as Krishna form.

The texture of a flower is like a rakhi

The texture of Krishna lotus is like such a rakhi, that’s why it is also called Rakhi Bell or Jhumka Lata. Due to its beauty, people want to plant it in their garden. Gardening expert Abhijeet Prajapati told The Better India that Krishna Kamal vine can be planted in the garden at home. Abhijeet lives in Lucknow, Uttar Pradesh and has been doing horticulture for many years. There are many types of fruit and vegetable trees and plants in his house. In his garden there are two species of Krishna lotus, one purple and one red. He told that most of the Krishna lotus plants come to the nursery during the rainy season. In addition, it can also be planted from cuttings or seeds.

how to plant krishna flower

To plant it in a pot, mix 20 percent sand and 30 percent cow dung in 50 percent soil. The size of the pot should be 12 to 20 inches. Along with this, its width and depth should also be good. Because the roots of the vine spread a lot. Soaking the seed in water for a few hours and then planting it in a pot. It starts growing in about two weeks. If you are planting a plant from a cutting, then try to plant it during the rainy season because the cuttings grow quickly during the rainy season.

Krishna lotus flower needs good sunlight, so keep it in a good sunny place. Take special care of it in the winter season, in the month of February, the buds start coming in it. Keep adding manure regularly at the time of bud formation in the plants. To ensure that the roots do not spread, keep moving the soil of the pot up and down every week. Keep an eye on the leaves regularly, they are prone to pests. Therefore, keep checking its leaves regularly, as well as sprinkling neem oil from time to time.

Read also: The fragrance of saffron is returning again in Kashmir’s fiza, farmers are excited to get the GI tag, hope for good earnings this time