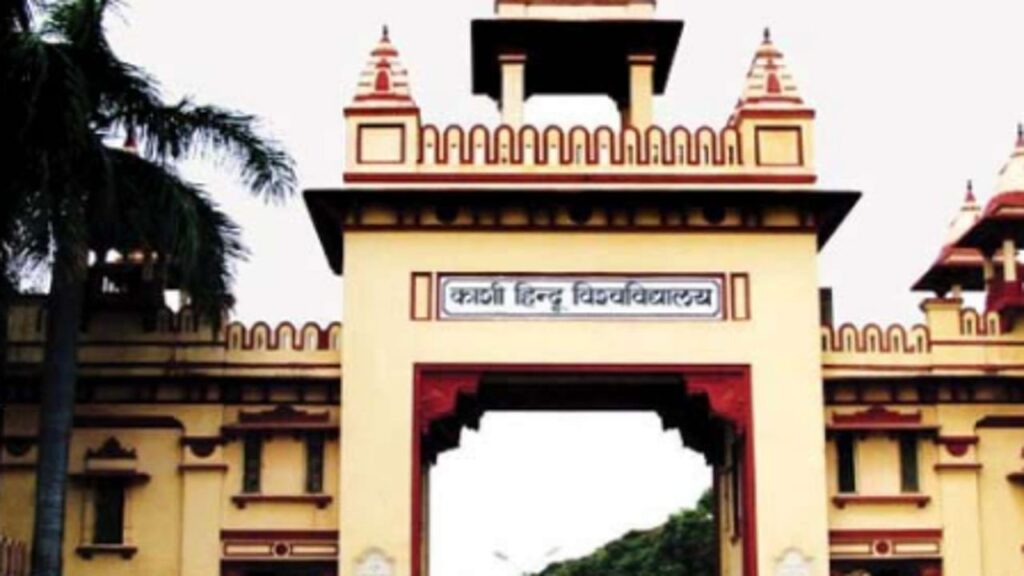 In Hinduism, religion is not the name of any particular sect, but it has been clearly stated that it is a sect. By following any sect, following the sect, you seem to have attained the destination, that is religion. What can be a better and more logical explanation of religion than this.

Banaras Hindu University (BHU) When the Hindu Studies Center opened, the eyebrows of many people were raised. They feel that on this pretext the government is pursuing its Hindu agenda. (Hindu Agenda) is loading. It is known that from 19 animals there Hindu studies at PG level (Hindu Studies) The studies have started. At present there are 46 students in this center, of which four are foreigners. In this, Hinduism will be taught in a modern perspective.

This initiative is fine, in this way it will be a great initiative to make religion compatible with today’s times. Recently, an American professor’s book has come, in which he has written that modern people do not read the Bible, because of this they do not understand the tradition of their religion. According to him, Darwin and Einstein had read the Bible and then they reached their conclusion.

Similarly, Hindu society also cannot steal its eyes from its history. Along with this, it should also be kept in mind that while writing Indian history, the Indian Puranas and Upanishads should not be ignored. By saying that the Vedas, Upanishads, Puranas and epics like Ramayana, Mahabharata are just fantasies. We are showing our ignorance. It should be kept in mind that any literature, whether it is religious or social, cannot ignore its society. There is a saying that ‘Literature is the mirror of society’.

That is, as the society will be, so will its literature, it is obvious that literature will also be created in the same way as the society would have been at that time. But where Western historians have considered Greek and Roman Puranas as history, they have been neglected in India. Obviously the history writers here have understood only power as history. The reason for the mutual conflict here is that there has never been an attempt to understand Indian history. Whereas the Puranas and ancient legends of India speak of the harmony here.

Many times it seems that if there was no religion, then perhaps this human life would have passed even from the animal, because man has his mind and he regrets it, he gets gleeful and becomes indifferent. To fill these feelings of man, religion gives him a destiny and man may be repentant or happy but religion gives him normal speed with its taboos. He tells that if there is color in life then happiness is also the same and if there is immense happiness then it is not going to last forever because “Har din jaat na ek samana!” Of course, not all days are the same.

When someone has a ‘climbing art’, he starts flying in the sky and as soon as that art descends, the mountain of sorrow breaks down. The reason for this is that when the art was up then you were not caring about anyone and today when that art is down, you remember all the same people.

Now think that if there was no religion then who would have given human support. Religion has given man a destiny and the art of living. So that he can treat everyone equally. The most recent of the modern Indian religions is Sikhism. In which is the essence of Vedanta and according to the new era it teaches the society to live an equal life. Its leader Guru Nanak had said in the beginning:

If there is one light, then all the world is upajya, who is good or not!!

(That is, all this pastoral world has emerged from the same beam of light and all religions too. So here who is to be called the best and who is the lowest? That light beam was created by the Supreme Soul himself.)

hand of the creator of happiness and sorrow

It is just a matter of leaving all the quarrels and renouncing the attachment of the paths and reaching the destination. There is misery in the life of a man and if he treats these sorrows as the work of the creator, then what is the misery! On his return to Ayodhya, when Bharata learns that his elder brother Shri Ramchandra ji has gone to the forest with Sita and Lakshmana at the behest of his mother Kaikeyi, he is shocked and immediately sets out to the forest to bring back Shri Ramchandra ji. Departure side. Arriving at the ashram of sage Bharadwaj in Prayag, when he comes to know that it is impossible for Rama to return, then he drowns in the ocean of sorrow. Then Rishi Bharadwaj explains to them. Saint poet Tulsi Das describes this in his Ramcharit Manas as follows-

(i.e. Raj Kumar Bharata, loss, gain and age or death or fame and failure in life are not in the hands of man, but in the hands of the Creator who created him. So there is no reason to express sorrow.)

If a man believes that his work in life is only to do work and he cannot get the results according to his desire, then he can get a life of peace to a great extent. Lord Krishna himself while preaching to Arjuna in Gita has said-

“Karmanye va dhikaraste ma phaleshukdachan” i.e. the right of a man is limited to his actions, he should not desire for the fruits. The day he desired for the fruit, despair would surround him. Because the fruit can never be found as expected. Every living being of this nature is alive on this strength.

An animal ambushes in the forest and runs after the deer. But even after running a race of several hundred or thousand meters, it is not necessary that he gets the prey and even if it is found, then it came to know that the powerful animal snatched this prey from him. Then he got as much as Vidhi had written for him. But if you continue to rely on the law, then man will stop working, that is, he will become karmanya. In order to allow nature to move at its own pace, every living being has to do its worthy work. Religion executes these actions and deeds, that is why religion has a social utility in human life.

when there is no one there is god

It is also believed in Islam that man is never alone. God is with him all the time.

When Hazrat Mohammad Saheb was going to Mecca, he was accompanied by his disciple Abu Bakr. Innumerable enemies on one side and only Hazrat Mohammad and Abu Bakr on the other. Abu was very nervous and looked around with suspicious eyes. Hazrat Muhammad Saheb asked why are you so nervous Abu Bakr? Abu Bakr said that we are only two and the enemy is in thousands that is why I am scared. Mohammad Saheb said that we are not two but three. Abu Bakr looked at him in awe. He said, did not understand anything. Hazrat Mohammad Sahab said that God is with us Abu Bakr. Remember that if you remember God, then God is with you all the time. And when God Himself is with us then what is there to fear? This faith gives us religion. Dharma is a regulator that regulates our lives.

The prophets, messiahs and incarnations of every religion come to regulate the life of man. Be it Islam, Christianity or Hinduism. Only religion is worth wearing, that’s why it is religion.

religion is the only

In today’s tumultuous age, man would have been destroyed if religion had not supported him. Swami Vivekananda had said that if you want to know religion, then go to the suffering and deprived person, there you will find God when you serve him. Here God means fulfillment means destination. This fulfillment is God who helps man in setting his goal. That is why every social reformer and dreamer of an equal society has described religion as essential for life.

Even in Hinduism, religion is not the name of any particular sect, but it has been clearly said that it is a sect. By following any sect, following the sect, you seem to have attained the destination, that is religion. What can be a better and more logical explanation of religion than this. Lord Krishna says in the Gita, “Mamekam Sharanam Braj!” Come take refuge in me and it has also been said that you should proceed on the same sect on which you are following-

Uttar pradesh assembly election: The contest will be exciting in Gorakhpur, Chandrashekhar Azad will contest the election against CM Yogi