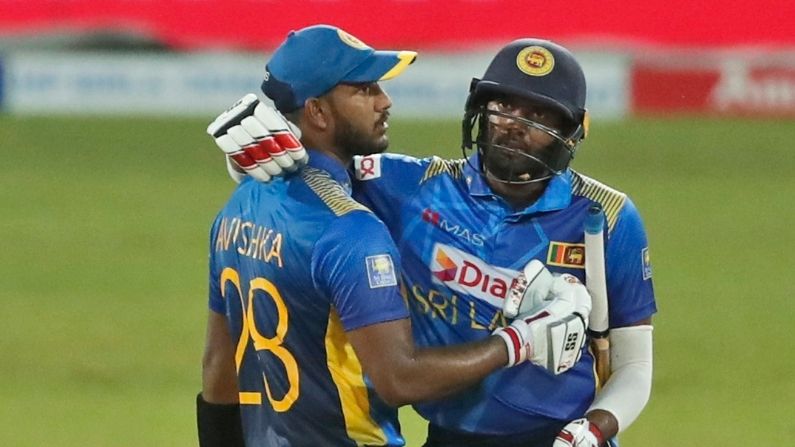 IND vs SL: Young batsmen Prithvi Shaw, Sanju Samson and Suryakumar Yadav failed to convert good starts into big scores. Due to this the Indian team got out for 225 runs in 43.3 overs.

Avishka Fernando and Bhanuka Rajapaksa were the heroes of Sri Lanka’s victory.

Sri Lanka defeated India by three wickets in the last ODI match. Although India had already won the series. India won the ODI series 2-1 under the captaincy of Shikhar Dhawan. Batting first in the last match, India gave Sri Lanka a target of 227 runs in a rain-affected match. The hosts achieved it in 39 overs with half-centuries from opener Avishka Fernando (76) and Bhanuka Rajapaksa (65). The match was reduced to 47-47 overs due to rain. Rahul Chahar was the most successful bowler for India and he took three wickets for 54 runs. Earlier, India’s young batsmen Prithvi Shaw, Sanju Samson and Suryakumar Yadav failed to convert good starts into big scores. Due to this the Indian team got out for 225 runs in 43.3 overs. India had won both the ODIs earlier. Now both the teams will face in the T20 series. This is Sri Lanka’s first win over India in ODIs since 2017. Also, for the first time since 2012, Sri Lanka has defeated India at home.

Chasing runs, Sri Lanka lost opener Minod Bhanuka (7) early on. Krishnappa Gautam got him caught by Chetan Sakaria. This was India’s first wicket in the powerplay overs of this series. But after this success, Avishka Fernando and Bhanuka Rajapaksa (65) added 109 runs for the second wicket and put Sri Lanka on the road to victory. Both bowled aggressively and took full advantage of India’s inexperienced bowling. Rajapaksa completed his first fifty in ODIs with the help of nine fours in 42 balls. At the same time, Avishka Fernando hit the fifth fifty in 53 balls with four fours and a six. Both took the score near 150 runs. Chetan Sakaria ended this partnership by getting Rajapaksa caught by Gautam. Nitish Rana gave life to Rajapaksa a ball before getting out. At the same time, Fernando also got life.

Dhananjay de Silva (2) became the second victim of Sakaria in the very next over. In such a situation, Sri Lanka’s score became 151 runs for three wickets. But Charit Aslanka played a fine innings of 24 runs and brought the team to 200. He could not understand a slow ball from Hardik Pandya and was found in front of the wickets. Captain Dasun Sunka became the first victim of Rahul Chahar after four balls. Then once again the Sri Lankan team faltered. Fernando also became Chahar’s second victim by scoring 76 runs. Then Chamika Karunaratne was also stumped on the same bowler after scoring three runs.

But Ramesh Mendis (15) and Akil Dhananjay (5) remained unbeaten and gave the team a three-wicket win with eight overs remaining.

Earlier, India, who had taken an unassailable 2-0 lead in the series, won the toss and decided to bat first, but when they scored 123 for three after 23 overs, the rain came. Due to this the match was reduced to 47-47 overs. In this way Sri Lanka got the target of 227 runs by Duckworth-Lewis method. When the game started after rain, India lost five wickets within 38 runs. He reached 200 runs with a 29-run partnership for the ninth wicket between Navdeep Saini (15) and Rahul Chahar (13). Leg-spinner Akila Dhananjaya and left-arm spinner Pravin Jayawickrama took three wickets each for Sri Lanka.

Shaw (49 off 49 balls) after being caught behind the wicket by captain Shikhar Dhawan (13) off Dushmanta Chamira (2 for 55), Samson playing his first match (46 off 46 balls) And Suryakumar (40 off 37 balls) got off to an impressive start but all three failed to play big innings. When Shaw, who hit eight visible fours in his innings, was just one run away from his maiden half-century, Sri Lankan captain Dasun Shanaka was dismissed leg before on a straight delivery in the first over. He even spoiled the DRS on this. There was a 74-run partnership for the second wicket with Shaun Samson.

Samson also rewarded his wicket by giving an easy catch at cover off Jayavikrama’s ball. After this, Suryakumar took the responsibility of scoring the run but Dhananjay got him out leg before with the help of DRS. Samson hit five fours and a six in his innings while Suryakumar hit seven fours. Manish Pandey (11 runs off 19 balls) failed again while Hardik Pandya too could only manage 19 runs off 17 balls. Debuting in ODIs, Nitish Rana (7) and Krishnappa Gautam (2) had a chance to shine but they could not take advantage of it.

read this also: Umpire made a mistake in Suryakumar Yadav’s DRS, player confused, Sri Lankan team celebrated despite being not out

Tokyo Olympics 2020: India will target four gold medals, know where and when you can get success