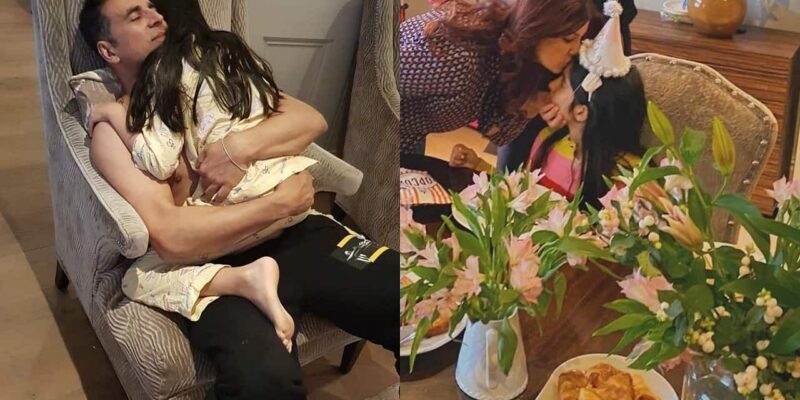 Akshay and Twinkle’s daughter Nitara has turned 9 today. On Nitara’s birthday, Akshay shared a picture hugging her. In the photo, Akshay is sitting on a chair and Nitara is sitting on his lap while hugging him.

Sharing the post, Akshay wrote – There is no greater happiness in the world than a tight hug of a daughter. Happy Birthday Nitara. Grow up, take care of the world, but always remain father’s younger daughter. Love you.

Twinkle Khanna has also shared the post on Nitara’s birthday. He shared a photo while kissing on Nitara’s forehead. In the photo, Nitara is sitting wearing a birthday cap.

While sharing the photo, Twinkle wrote – I have had this girl with serious face and sense of humour in my life for nine years. She wrote in the last – Keep laughing like this with a laugh in her eyes. Happy Birthday. Many celebs have wished Nitara a birthday by commenting on Twinkle Khanna’s post. Tahira Kashyap commented- awww.. Love and best wishes. At the same time, Bobby Deol commented – Happy Happy Son.

Akshay Kumar made a special announcement

Today is a special day for Akshay Kumar along with Nitara’s birthday. Akshay has informed about the release of his upcoming film Sooryavanshi. Theaters are going to open in Maharashtra from October 22. With which the release of Suryavanshi has been announced. Akshay Kumar has given information about this by sharing the post. Sharing the photo with Ranveer Singh, Ajay Devgan and Rohit Shetty, Akshay Kumar wrote – Many families must be thanking you Mr. Uddhav Thackeray ji. I am very thankful that theaters are going to open in Maharashtra from 22nd October. Now it will not stop due to anyone’s stop. Police is coming. Diwali 2021.

Also read: Shilpa Shetty makes her one and a half year old daughter Samisha do yoga in front of everyone, Geeta Kapoor reveals

Honsla Rakh Trailer: Trailer of Diljit Dosanjh and Shahnaz Gill’s film will be released on this day, new poster surfaced