WFI controversy: Now the government is angry with the wrestlers, angry on the ‘rebellion’ of the decision 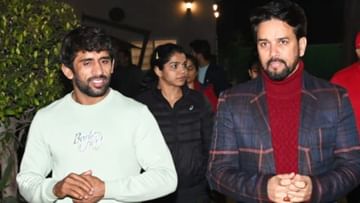 On Saturday, January 21, after a meeting with Union Sports Minister Anurag Thakur, the wrestlers ended the strike with the assurance of formation of a monitoring committee.

In the meeting of the wrestlers and the Sports Minister, it was agreed to form a monitoring committee.

Indian wrestling brawl It is continuing and now the displeasure between the wrestlers and the central government is also increasing. Wrestling Federation of India (WFI) president Brij Bhushan Singh had created a storm last week by making serious allegations like sexual exploitation and sitting on a dharna against him, after which Union Sports Minister Anurag Thakur ended the strike by assuring them of an investigation. Was. Now the reaction of the wrestlers on the committee formed regarding this investigation has made the government unhappy. Along with this, it has been decided not to reconstitute the committee.

Following last week’s controversy, Sports Minister Anurag Thakur spoke to protesting wrestlers such as Vinesh Phogat, Bajrang Punia, Sakshi Malik and Ravi Dahiya and assured them of setting up a monitoring committee. On Monday, January 23, the Sports Ministry constituted a five-member committee under the chairmanship of Olympic medalist and veteran boxer MC Mary Kom. However, the wrestlers expressed displeasure over this and said that they were not consulted as promised.

According to the report of the news agency PTI, sources have made it clear that the government will not reconstitute the committee. A source in the ministry told PTI on Wednesday,

The ministry has no plans to reconstitute the monitoring committee set up to look into the allegations against the WFI chief. We have constituted an impartial committee headed by MC Mary Kom to investigate the matter.

Not only this, this source also said that the government is not happy with the behavior of the wrestlers as they publicly objected to the formation of the committee. According to sources, the protesting wrestlers consider London Olympic bronze medalist Yogeshwar close to the WFI president. Last week, when Yogeshwar supported WFI president Brij Bhushan surrounded by allegations, Vinesh had said that he is sitting in the lap of WFI.

Why do wrestlers have objection?

However, contrary to the speculations, Olympic medalist and protest wrestler Bajrang made it clear that the wrestlers had no objection to Yogeshwar but expected to consult him before selecting the committee members. Bajrang Punia told PTI, we would like to talk to the Sports Minister after the Republic Day celebrations. We have no problem with any member of the committee but we should have been consulted. There was a discussion in which these names came up but after the discussion we were told to come and tell the names. But the names were announced even before we got a positive answer. The government should not be angry with us. What have we done, we are fighting for justice.