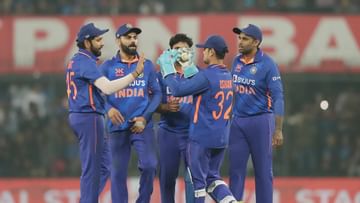 The Indian team defeated New Zealand unilaterally in the third ODI. In this match, Virat Kohli remained silent with the bat but definitely remained in discussion due to his fun on the field.

Virat Kohli could not show amazing with the bat in the third ODI.

The Indian cricket team defeated New Zealand by 90 runs in the third ODI match played at the Holkar Stadium in Indore. With this victory, Team India has secured the first position in the ODI rankings. Virat Kohli’s bat could not do much in this match, but he definitely made headlines with his dance. Virat scored 36 runs in 27 balls in this match. In his innings, he hit three fours and a six. He was caught by Finn Allen on the ball of Jacob Duffy.

Team India’s victory seemed certain in the third match, but the way Devon Conway was batting, Team India was facing trouble. Glenn Phillips is such a batsman who would have added to India’s troubles if he had survived. But this did not happen. On the fourth ball of the 28th over, Shardul Thakur showed him the way to the pavilion. Phillips tried to send Thakur’s ball outside the deep midwicket boundary but Kohli took the catch. After catching this catch, Kohli looked very happy and then started dancing.

As far as the match is concerned, Team India, batting first in this match, scored 385 runs losing nine wickets in the allotted 50 overs. Rohit Sharma played an inning of 101 runs. He faced 85 balls and hit nine fours and six sixes in his innings. He shared a 212-run partnership with his opening partner Shubman Gill. The New Zealand team could not stand in front of this huge score. For that, Conway scored the maximum 138 runs. In his innings, this batsman faced 100 balls and hit 12 fours and eight sixes.

First day, first over and Pakistan’s senses blown away, Irfan’s hat-trick pulled out