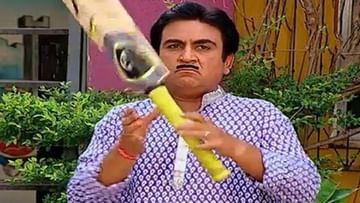 Rituraj Gaikwad hit 7 sixes in an over in the quarter-finals of Vijay Hazare Trophy, ‘Jethalal’ trending on social media. Yes, there Jethalal of ‘Taarak Mehta Ka Ooltah Chashmah’. People are fiercely sharing mimes regarding this on Twitter.

Rituraj Gaikwad played such a stormy inning today that his name got recorded in history. Actually, Vijay Hazare Trophy Gaikwad scored an unbeaten 220 off just 159 balls against Uttar Pradesh in the quarter-finals. During this, he hit a total of 10 fours and 16 sixes. The most important thing in this was that he hit 7 sixes in a single over and scored a total of 43 runs. Now you must be wondering how 7 sixes were hit in 6 ball overs? So sir, the bowler had bowled a no ball and Gaikwad had hit a six on that too. Now amidst this rain of Gaikwad’s sixes social media Feather ‘Jethalal‘ Trends are starting to happen. Yes, right theretaarak mehta ka ulta chashma‘ Wale Jethalal.

Actually, the reason for Jethalal’s trend among Rituraj Gaikwad’s sixes is that in one episode Jethalal had said that he had scored 50 runs in an over with the help of 8 sixes. IPL team Rajasthan Royals has also shared this video of Jethalal on Twitter, while users are also enjoying it fiercely. Some are saying that Yuvraj Singh or Rituraj Gaikwad have not made the most runs in an over in cricket, but Jethalal has made it, while some are saying that ‘no professional cricketer can break this record of Jethalal’. Similarly, people are enjoying a lot by sharing many other types of memes.

See how people are enjoying through memes:

First batsman to score 50 runs in an over 🔥😎 #jethalal #tmkoc #RuturajGaikwad pic.twitter.com/hJiJWoSE37

No one break #jethalal record 🫡 1 over me 50 runs pic.twitter.com/aQ2aUhgqtk

Yes, Ruturaj scored 43 runs in one over….

Jethalal with 50 in over unbeatable pic.twitter.com/dItHjg8aDe


Rituraj Gaikwad hit 7 sixes in one over on the ball of bowler Shiva Singh and made a unique record.