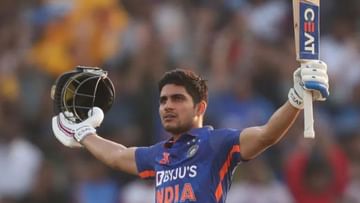 From New Zealand, Michael Bracewell scored a tremendous century while playing a stunning innings and put India in danger by sharing a 162-run partnership with Santner.

In the year of ODI World Cup, where Team India is getting good results from the batsmen, while India’s problem in bowling is still visible. A month and a half ago in Bangladesh, then this month against Sri Lanka and now in the first ODI match against New Zealand, the lower order batsmen forced Team India to make papad. Despite Shubman Gill’s double century and a score of 349 runs, Team India lost the sweat to win as Michael Bracewell put India in danger till the very last over on the basis of a sensational century innings. Eventually, somehow Team India won the match with a mere margin of 12 runs.

Team India, playing ODIs in Hyderabad after many years, had a hold on the match for a long time. It started with the bat, where Shubman Gill got his name recorded in history by achieving one of the rarest achievements of ODI cricket. Despite scoring an excellent century against Sri Lanka three days ago, Gill, who did not get much attention, this time made sure that everyone remembers his innings.

The 23-year-old young Indian opener not only scored a century in the second consecutive match, but also converted his century into a memorable double century. In just 145 balls, Gill became the youngest batsman to score a double century in ODIs.

Apart from Gill, although none of India’s batsmen could walk, but kept supporting Gill. The biggest score after Gill was captain Rohit Sharma (34), while Virat Kohli, who scored a century in the last match, could score only 8 runs. At the same time, Ishan Kishan, who made a place in the playing XI in this match, could not make any impact in the middle order, while Suryakumar Yadav got a start but could not convert it into a big score.