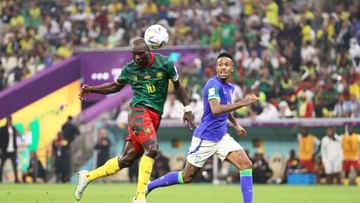 FIFA World Cup 2022 Match Report: Brazil has reached the next round even after losing to Cameroon from Group-G, while Switzerland has also booked a knockout round ticket.

FIFA World Cup-2022: The ups and downs in the Football World Cup being played in Qatar is not taking its name. The group stage ended on Friday and this end also happened with a big twist. Cameroon beat five-time champions Brazil 1-0 in a very tough match. The winning goal for Cameroon came in extra time. However, this defeat has not affected Brazil’s World Cup campaign and it has been successful in reaching the knockout round. With this, Cameroon is the first African country to beat Brazil in the World Cup.

With this vicissitudes, the Brazilian team has joined those veteran teams who have been victims of vicissitudes. Before Brazil, teams like Argentina, Germany, Belgium, Spain and France have been victims of vicissitudes in this World Cup. Cameroon, however, has not been able to qualify for the next round even after winning as Switzerland beat Serbia 3-2 in the second match and cut the ticket to the next round. Both these matches were played at the same time.

red card after scoring a goal

This is Brazil’s first defeat in the group stage of the World Cup in the last 24 years. Nevertheless, she topped her group and reached the next round. Abubakar took off his shirt after scoring the historic goal against Brazil and started celebrating. He threw his shirt on the ground. On this, he got a yellow card, which was his second yellow card of this match. Two yellow cards meant a red card and hence Abu Bakr had to go out.

Cameroon had gone winless in their last nine World Cup matches, but a header from Abubakar ended their drought and beat Brazil. Was defeated 2-2. Brazil, however, beat Serbia and Switzerland to make it to the round of 16 where they will face South Korea.

The Brazilian team had already reached the next round. That’s why the coach made a lot of changes in the starting eleven. He fielded the team with nine changes. Neymar is already running out due to injury. Alex Telles was also ruled out due to injury. Both the teams created many chances in this match but could not convert them. Brazil especially created more chances and wasted them.

Whereas in the second match of this group, there were a lot of goals scored. The Swiss team scored one goal more and was successful in defeating Serbia. Both Brazil and Switzerland teams have equal six points but Brazil’s team is better in goal difference, so it won the first place in the group.

Switzerland scored the first goal in this match in the 20th minute. Shakiri scored this goal for him. Six minutes later, Mitrovic scored an equalizer for Serbia. Vlahovich took the lead in the 35th minute. Embolo scored a goal in the 44th minute to bring Switzerland on par. After this, in the second half, R Feuler put Switzerland ahead by scoring in the 48th minute and then this proved to be the last goal of the match.