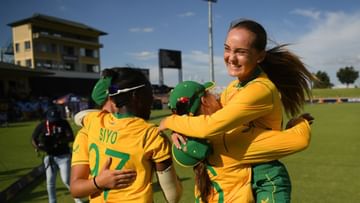 The ICC Women’s Under-19 World Cup is being organized in South Africa and in this World Cup, the bowler of the host country has become the first bowler to take a hat-trick.

South African bowler took the first hat-trick of the Women’s Under-19 World Cup.

In the ICC Women’s Under-19 World Cup being played in South Africa, on Monday, the bowler of the host country took the first hat-trick of this tournament. The name of this player is Madison Landesman. This bowler did this against the Scotland team in the match played at Willomore Park in Benoni. He played a big role in all outing the Scotland team with his hat-trick and gave South Africa a 45-run victory.

The South African team batted first in this match. However, the team could not score big. This team scored 112 runs losing seven wickets in the stipulated 20 overs. Scotland’s team collapsed after scoring 68 runs in 17 overs.

Amazing done in 15th over

Madison took this hat-trick in the 15th over. He dismissed Maryam Faisal on the second ball of this over. She was able to score only six runs. After this, he showed the way to the pavilion to Nimah Muyuir on the third ball and completed his hat-trick by dismissing Orla Montgomery on the next ball. ICC is organizing the Under-19 World Cup in the women’s category for the first time. In such a situation, Madison has become the first hat-trick bowler in the history of this tournament.

He bowled four overs and took a total of four wickets for 16 runs. After the hat-trick, he ended Scotland’s innings by showing the way to the pavilion on the last ball of the 17th over. Apart from him for South Africa, Jema Botha and Sesnai Naidu took two wickets each. Ayanda Hulby and Kayla Reineke took one wicket each.

If this match is seen, then only the bowlers got to see their charm. South Africa played the first innings but still could not score big. For that, Kayla scored the maximum 53 runs, for which she faced 49 balls and hit one six apart from five fours. Jenna Evans remained unbeaten after scoring 22 runs. Apart from these two, only two players could reach double figures.