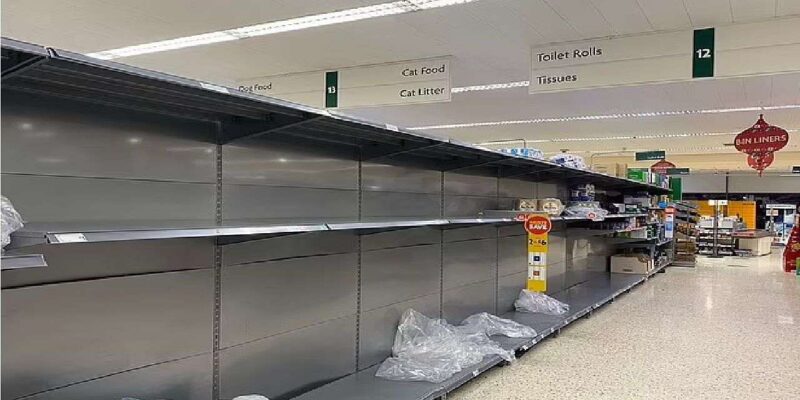 The situation in Britain is getting worse, as millions of people are facing difficulty in buying essential food items for the last two weeks. British soldiers will soon have to drive trucks. The supply chain crisis still persists in the country. Shocking new figures from the Office of National Statistics say that one in six British citizens have been unable to buy essential food items in the last 15 days due to the rush of people in Britain. A survey of 1,000 consumers conducted by The Grocer showed that two-thirds of shoppers are worried about a possible shortage of food and drink ahead of the festive season.

The deteriorating condition of the country can be understood in such a way that on the night of 25 December, preparations are already being made to eat on Christmas Day. Hundreds of thousands of panic-stricken buyers have already booked their delivery slots for Christmas. One in three buyers have already started stocking up on groceries. Britain has had to deal with many crises in recent times. This includes issues like rising gas prices and shortage of truck drivers. Because of this anarchy has arisen in the country. Britain has also issued visas to overcome the shortage of truck drivers.

Senior government officials have reportedly said they are considering deploying troops to drive trucks during Christmas to prevent food shortages. Prime Minister Boris Johnson has appointed former Tesco boss Sir Dave Lewis as head of the supply chain crisis. At the same time, one in six people have been unable to buy essential food items in the last 15 days due to lack of food in the coming months. According to the Office for National Statistics, about 17 percent of adults said they could not buy such items because they were not available.

Surprising results revealed in the survey

A quarter of those surveyed said they were unable to buy non-essential food items. 57 per cent people say that the things they want to buy are still available for purchase. One in seven people say that they have been unable to buy petrol because they are facing shortage of fuel. 6 out of 10 people said their food shopping experience was unusual. 43 percent of the people said that there was a lack of variety in the goods in the stores. 14 percent of the people surveyed said that they had to go to other shops to buy essential things.

IPL 2021: The entire season was spent on the bench, debuted in the last match, 1 wicket made India’s most successful bowler