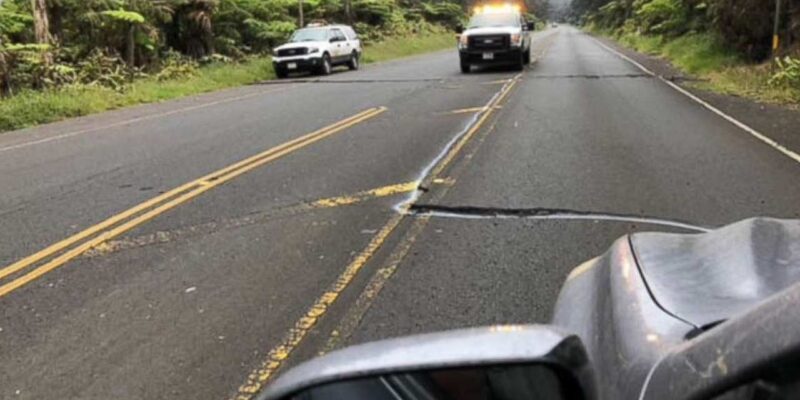 Volcanic eruption is believed to be the main reason for the earthquake.

In the US state of Hawaii (Hawaii), two aftershocks of earthquake (Earthquake in Hawaii) on Sunday have put people in panic. Two strong tremors of the earthquake were felt on the Big Island here. It is being told that both the tremors were of great intensity. No tsunami warning has been issued after these tremors.

According to the US Geological Survey (USGS), the first tremor in Hawaii was a magnitude of 6.1. This tremor was felt on Sunday afternoon. Its center was the Big Island, located 17 miles to the south. The second blow was recorded after 20 minutes. The intensity of the second tremor was 6.2 and it was also recorded in the same area.

Tremors due to volcanoes!

A tremor of magnitude 6.3 is considered a strong aftershock by the USGS. Due to these tremors, about 2,000 people living here are scared. Honolulu’s National Weather Service has said that there is no tsunami threat after these tremors. In the past 10 days, 15 such earthquakes have occurred in Hawaii whose intensity has been recorded 6 or more. All these tremors were felt within a radius of 62 miles. At present, there is no news of any injury or loss of life or property in the latest incident. But the tremors were so strong that the items kept in the shelves fell down.

what did the scientists say

These tremors have been felt after the eruption of Kilauea volcano located in Hawaii. This volcano is currently the most active volcano on Earth. Last month it started blazing again. Because of this, lava and smoke have spread to the surrounding areas. The USGS says the volcano erupted in Helmaumau Crater and has been controlled inside Hawaii Volcanoes National Park.

Because of this, there is no danger to the homes of the people located in the surrounding areas. However, according to the Hawaiian Volcano Observatory scientist Ken Hawn, the aftershocks on Sunday have nothing to do with the eruption of the volcano. Kilauea Volcano has been active since 1983. Often earthquake tremors occur in the Big Island due to this volcano. In December 2020, a 4.4-magnitude earthquake was caused by the eruption of the Kilauea volcano in the Big Island.

Also read- After all, why is it necessary to establish a colony of humans on Mars? These five reasons give the answer

Uttarakhand High Court allows IFS officer Sanjeev Chaturvedi to represent himself in his case, saying – they are fighting a difficult battle