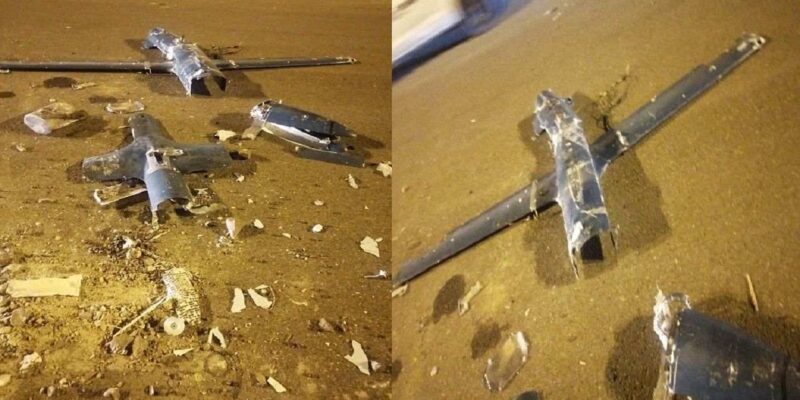 Drone fragments scattered after the attack

At least 10 civilians were injured when an explosives-laden drone exploded at King Abdullah bin Abdulaziz International Airport in Saudi Arabia’s southwestern border city of Jazan. This is the second such attack within a week. The Saudi Press Agency (SPA) reported that a drone attack was carried out by Houthi Rebels from Yemen late on Friday night. Ten people were injured when they were hit by debris caused by the drone strike.

Brigadier General Turki al-Maliki, the official spokesman for the Saudi-led coalition, said later on Friday that civilian passengers and airport workers were among the injured, including six Saudis, three Bangladeshi nationals and one Sudanese. The intensity of the blast broke the glass windows at the airport and the victims suffered minor injuries. Another unmanned aerial vehicle (UAV) was launched on Wednesday by Houthi rebels towards the Abah International Airport in the country’s southwestern Asir province. After this the attack happened. At least four airport employees were reportedly injured in the attack.

War continues in Yemen since 2015

The dispute between Yemen and Houthi rebels began in September 2014, when Iran-backed militias captured the capital, Sanaa. The rebel group toppled the government of President Abed Rabbi Mansour Hadi and formed the Supreme Political Council with its allies backed by former president Ali Abdullah Saleh. After this development, Saudi Arabia and the United Arab Emirates recognized the government of Yemen. At the same time, from March 2015, both the countries waged war against the Houthi rebels. Because of this war, President Hadi was forced to flee the country to Saudi Arabia.

In January 2021, former US President Mike Pompeo proposed to designate the Houthi rebels as a ‘foreign terrorist organization’. However, Joe Biden’s administration took over the presidency a month later and halted arms supplies to the UAE and Saudi Arabia. Also demanded the implementation of ceasefire. The State Department also said that the Houthi rebels would not be considered a terrorist group. Thousands of people have died in Yemen due to the ongoing war since 2015. Because of this, a serious humanitarian crisis has also arisen in Yemen.

Also read: Syria: The general public is suffering due to the war! ‘Wheat crisis’ arose in Syria, the people lying in front of the bread