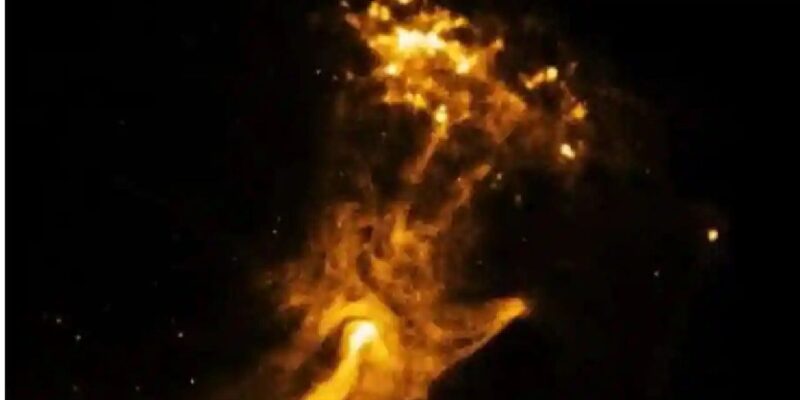 Hand of God: American space agency NASA told that this golden structure is a nebula containing energy and particles emitted by a pulsar.

Our universe is full of wonders and wonders. Its beauty is unparalleled and sometimes we get to see its beauty which is mesmerizing. The American space agency NASA often shares pictures of the universe with people. Recently, NASA has shared such a picture, which people have been surprised to see. This picture has been named ‘Hand of God’. Thousands of people have liked this picture shared by the US space agency NASA on Instagram. NASA shares pictures taken by the Space Telescope.

In this picture of ‘God’s hand’, it can be seen that dark and black space is visible in its background. At the same time, a golden structure is visible in it, which looks like a hand. This is the reason why it has been named ‘NASA Hand of God’. This structure appears to emerge from the void. It seems that some supreme power is giving its blessings. The beauty of outer space can be seen in this picture. Many flashing lights are visible in the picture, which are in the shape of a hand.

This beautiful structure is located 17,000 light years away from Earth

NASA said that this golden structure is a nebula containing energy and particles released by a pulsar. After a star explodes, pulsars are left behind. This pulsar is known as PSR B1509-58. It is about 19 kilometers in diameter. The surprising thing is that it is rotating on its own 7 times per second. This structure is 17,000 light years away from Earth. According to the US Space Agency, this picture was taken by the NuSTAR Space X-ray Telescope. It said that at the time this picture was taken, it looked more like a fist than a hand.

People gave such reactions to the picture

After sharing this picture by the US Space Agency, people have made various comments on it. Many people showed their enthusiasm about this picture. Many people compared it to the ‘hands of God’. At the same time, some people thanked NASA for sharing such wonderful pictures with the people. One Instagram user wrote, ‘This is really awesome! I am watching it continuously for the last 10 minutes. Another user wrote, ‘I am glad we are here to see this!’ At the same time, another user said, ‘It looks like a bird is flying.’

Have you heard of Beggar Bank? Gives loan at only 1% interest! Know where is this bank and how it works