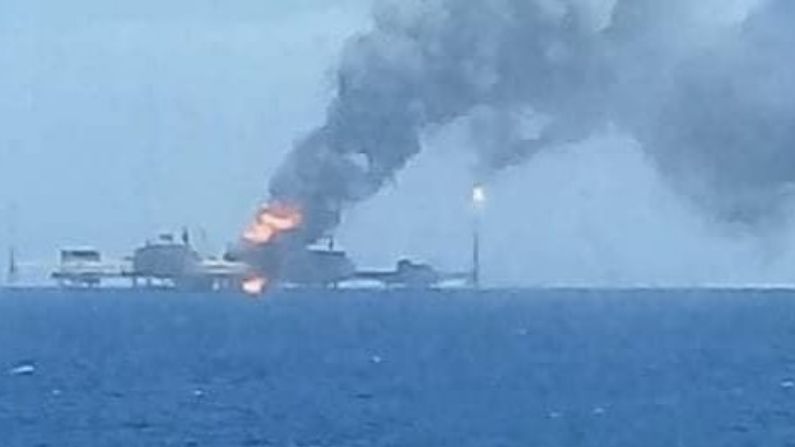 Fire on Oil Platform: Mexico’s state-run oil company Pemex said that due to the fire on the oil platform, a loss of Rs 185 crore is being done every day.

Smoke coming out after the fire on the oil platform (Twitter)

Mexico’s state-run oil company said on Monday that a fire broke out on one of its oil platforms located in the Gulf of Mexico. In this incident five laborers died, two went missing and six people were injured. Petroleos Mexicanos (Petroleos Mexicanos) said that the fire on the platform located in Ku-Maloob-Zaap was brought under control on Sunday. Even before this, there was an incident of fire at this place located in the Gulf of Mexico.

The company said the fire forced the closure of 125 oil wells in the area, which would reduce Mexico’s oil production by 4,21,000 barrels per day. Due to this, the company will have a loss of $ 25 million (about Rs 185 crore) per day. The situation is not clear about the possibility of finding the missing laborers and the platform has been gutted. The company’s director, Octavio Romero, said that some workers died while doing daily work on the platform. Romero said that the company will try to restore production as soon as possible. Romero said the investigation into the cause of the accident was ongoing.

Octavio Romero has said that he hopes to start production from the oil wells soon. Pemex said three of the injured were its employees and three others worked for a subcontractor. One of the dead is an employee of Pemex and the other four subcontractors are employees of Kotemar. The condition of one of the injured working is critical. The two missing workers belong to another subcontractor. Maintenance work was being done by subcontractors. Pemex said it was looking for missing people. Since this incident, the company is also being accused of negligence.

At the same time, before this accident, another Petrolos Mexicanos pipeline leaked in the Gulf of Mexico. This incident happened two months back. Because of this a strange ball of fire was formed on the surface of the sea. Its video was becoming fiercely viral on social media. In the video going viral, it could be seen that bright orange flames were rising above the sea surface like a flowing lava. People named it ‘eye of fire’. It was given this name because of the circularity of the flames. Pemex said that the fire has been extinguished.

Also read: Taliban’s warning…danger in Kabul, the work of evacuating people through the air route from Afghanistan continues