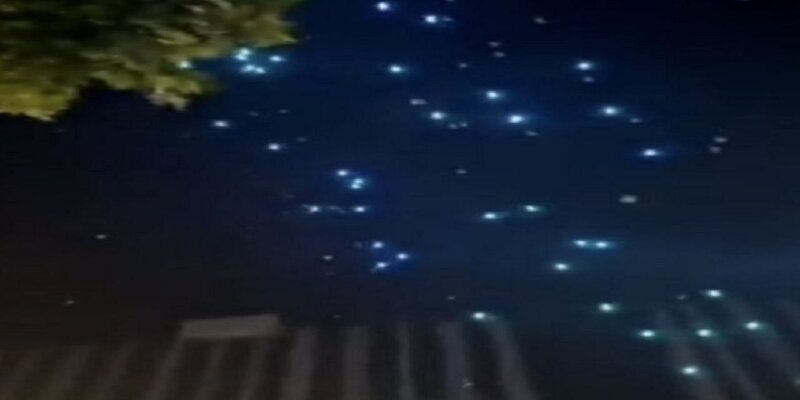 The video of this incident which took place in Zhengzhou High-tech Zone of Henan Province of China is becoming increasingly viral on social media.

Light show was organized outside a shopping mall in China, but this show emerged as a trouble for the people. In fact, more than 200 drones took off at the Wanda Plaza shopping mall in Zhengzhou High-tech Zone of Henan Province. But soon after the start of the light show, these drones started falling back on the ground. The video of the incident is going viral on social media, in which the drone can be seen hitting the ground.

Some people compared this incident to a sci-fi film. This is because on seeing it initially, it seemed that the aliens’ ship was moving rapidly towards the ground, but after coming closer, people got scared and they started running towards safe places. It was seen in the video that after falling down the drones, the passersby started running fast. Seeing these drones with blue lights, people are shouting. However, when the drones started hitting the ground (Drone Falling from the sky), the rest of the drone operators took control of their respective drones.

Drones fall from the sky in China. 🤔 pic.twitter.com/m3hK71QOEA

The reason for the drones hitting the ground is not known

The drone light show was organized at a shopping mall located in Zhengzhou, 450 miles from the capital Beijing. This place is situated on the banks of the famous Yellow River. It has been told that five thousand people were watching this light, which included a large number of children. However, it is not yet clear what was the reason, due to which the drones started falling on the ground. At the same time, an organizer who organized this light show told the China News Service that the drones may have started falling due to ‘operation error’. There is no information about any injury in this incident.

Such accidents have happened before

At the same time, a 20-year-old resident involved in this light show said that more and more drones were falling down. Some went flying far, while some hit trees. He told that during the incident, the staff members let people inside the mall and picked up the drones from the ground. This is not the first time that such an incident related to drones has happened in China. In May last year, 17 drones crashed into the ground during an event in Chengdu, southwest China. Police investigation found that drones, jammers, were used. This was done by a rival company.

Also read: Passport Ranking: UAE passport is the most ‘powerful’ in the world, New Zealand at number 2, know the rank of India-Pakistan

Can competition be seen in Tata and Thar, both companies are bringing new vehicles

Attention! Have you also received a call or message to win the lottery, may be a victim of fraud