Bangladesh: Attacks on Hindu temples and shops, miscreants looted, now minority groups will go on hunger strike across the country 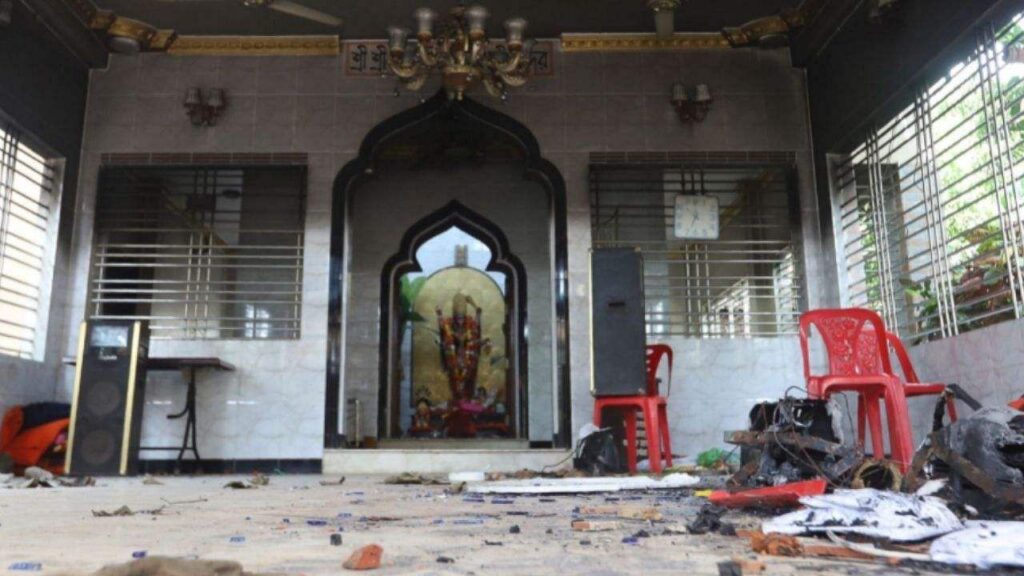 Attack on Hindu Temple in Bangladesh

Bangladesh Anti Hindu Violence: In the recent incident of communal violence that has been going on for several days in Bangladesh, a Hindu temple has been vandalized. Earlier, unidentified Muslim fundamentalists ransacked temples and spread violence over alleged blasphemy. After these incidents, the minority group has announced a hunger strike across the country. According to the news of ‘Dhaka Tribune’ newspaper, there have been fresh clashes after attacks on people protesting against the attack on Durga Puja places in different places in Bangladesh.

After this, temples and shops of Hindus in Feni, about 157 km from the capital of the country, were ransacked and looted on Saturday. It was told that at least 40 people including the in-charge of Feni Model Police Station Nizamuddin were injured in the clashes (Violence in Bangladesh Today). The report said that the clashes, which started at 4.30 pm, went on till late in the night, during which several temples, businesses of Hindus were vandalized and looted. After this, on Saturday night, additional police force and paramilitary force Border Guard Bangladesh were deployed by the authorities.

The newspaper reported that on Saturday, some miscreants damaged six idols at Daniyapara Maha Shoshan Kali Temple in Rashuniya Union of Sirajdikhan Upazila of Munshiganj (Bangladesh Hindu Temple Attack). It was told that during the Durga Puja festival, there were demonstrations across the country on Saturday in protest against the attacks and vandalism on Hindu temples, while there were also incidents of sabotage. Meanwhile, the Bangladesh Hindu Buddhist Christian Unity Council in the country’s south-eastern city of Chittagong has announced a sit-in and fast from October 23 in protest against the attacks during Durga Puja celebrations.

The general secretary of the council, Rana Dasgupta, told a press conference in Chittagong that protests would be held in Dhaka’s Shahbagh and Chittagong’s Andrakila (Bangladesh Hindu Violence News). The Bangladesh Puja Udyapan Parishad has demanded strict punishment for those involved in incidents of sabotage and violence. Its president Milan Kanti Dutta said that if the government does not accept their demands, then a big campaign will be launched. ISKCON Bangladesh general secretary Charu Chandra Das Brahmachari warned that the community would not sit quietly and watch the attacks happen.