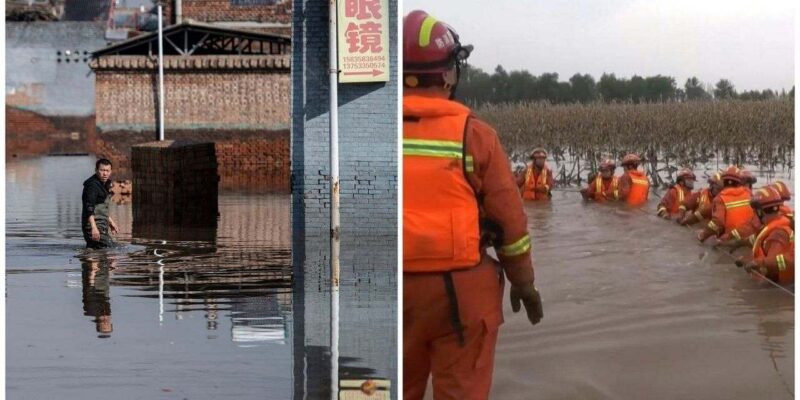 China Floods 2021 Latest News: There is a severe flood in Shanxi province of China, in which at least 15 people have died. While three others are missing. According to government media reports, Shanxi is one of the country’s largest coal production areas. The state-run Global Times reported on Tuesday that about 17.5 lakh people have been affected and 19,500 houses have collapsed due to the floods. Due to which 120,000 people have been forced to be displaced.

The report did not say which area of ​​Shanxi was most affected by the floods. The province is located to the west of the capital Beijing and covers approximately 156,000 km (60,000 sq mi). According to the report, it has been initially found that the flood caused at least $ 770 million in damage (Flood in Shanxi Province). China’s state-run news agency Xinhua reported that the emergency situation has now subsided. Which makes it seem that the situation is stable. The water level of small and medium sized rivers has dropped below the warning mark.

Flood destroyed a large part of the crop

China has suffered a lot due to floods this year. Heavy rains and floods have caused a lot of devastation here in different parts. In July, floods in Henan province killed more than 300 people. Due to which the danger of power supply has increased in winter (China Flood Affected Areas). An estimated 190,000 hectares (470,000 acres) of crops were also destroyed, local Communist Party newspaper Shanxi Evening News quoted AFP news agency as saying. Shanxi is a land-locked province and the weather is often dry. But this time it has been raining continuously for the last one week.

The provincial government said the coal mines had been ordered to take flood prevention measures and make emergency plans to “activate immediately in the event of grave danger”. According to a statement from the local government, at least 60 coal mines in the province have stopped working due to the floods. That too at a time when the country is facing power crisis (Power Cut in China). Beijing recently announced no exemptions to coal mines to increase production and ensure supply, saying it would raise electricity prices. China is facing its biggest power crisis ever amid record coal prices, government controls on electricity prices and tough emissions targets that curtail electricity supplies.

The woman was sleeping peacefully on the bed, the meteorite fell from the sky by tearing the roof