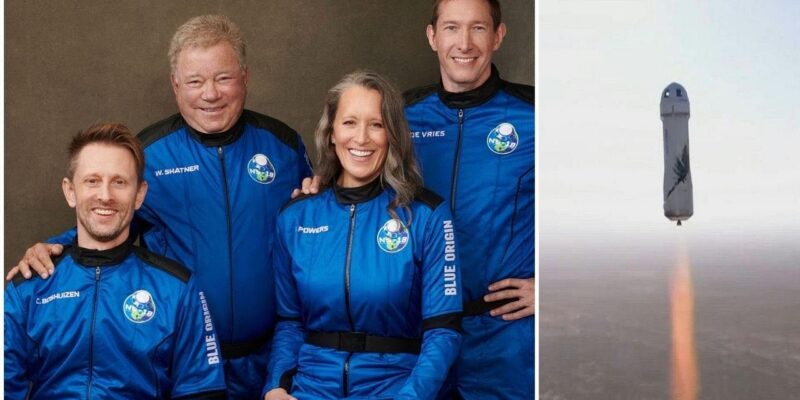 Blue Origin Second Space Tourism Flight: Jeff Boges’s company Blue Origin’s New Shepherd rocket-capsule flew into space for the second time. In which the journey was completed successfully. This time 90-year-old Canadian actor William Shatner went on a space walk. He has also created history as soon as he completes the journey. He has become the world’s oldest person to travel in space (Space Travel News). Blue Origin’s rocket landed on the desert in Texas, USA on Wednesday. Shatner is one of four travelers who have gone to the ends of space.

These people went in a 60 feet long Shepherd spacecraft shaped like a white football. They all took off from Blue Origin’s launch site, which is located about 20 miles (32 km) from a rural area outside Texas City. The four astronauts experienced weightlessness for about three to four minutes and traveled above the internationally recognized limit of space, known as the Karman Line (New Shepard Spacecraft). It is about 62 miles (100 km) above Earth. Later the crew capsule parachute returned to the Texas desert.

All the astronauts were wearing blue flight suits. On which the name of the company is written in white color Blue Origin. Light wind was blowing at the time of launch and the sky was clear. The flight has been delayed by about 45 minutes twice before (Space Travelers). The remaining three passengers are former NASA engineer Chris Boshunijn of the US space agency NASA, clinical research entrepreneur Glenn de Vries and Blue Origin’s vice president and engineer Audrey Powers. Everyone appeared very curious about the flight.

Talking about William Shatner, he is an actor as well as a writer, director, producer, screenwriter and singer. Now he has also become an astronaut. Shatner has been acting for seven decades (William Shatner Space Trip). In the 1960s, he had a TV series Star Trek, in which he played the character of Captain James T. Kirk. After this, when the film was made on this story, he played the role of Captain Kirk. He has traveled to space many times in his reel life, but this was his first such experience in real life.

Also read- Taliban got Qatar’s support, Foreign Minister said – partnership will give strength to weak voices, it is wrong to isolate

UP government will soon give compensation for crop loss, Kisan Chaupal will be organized in 56000 gram panchayats

KBC13: Big B said ‘you are looking poison’, told how is Shweta-Abhishek’s relationship