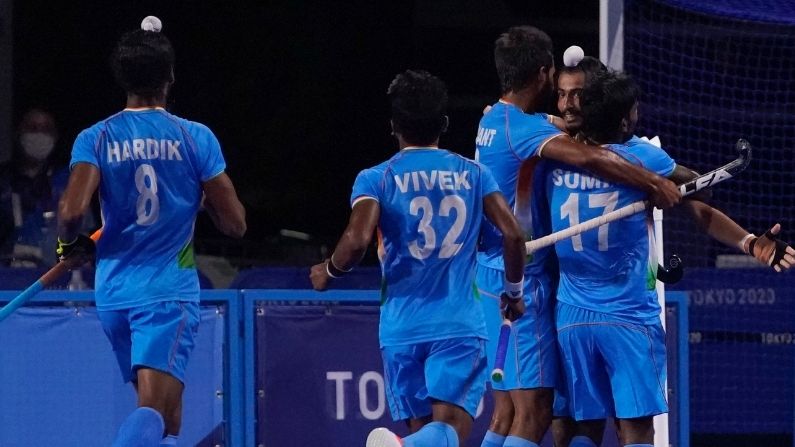 The Indian team’s performance in the Tokyo Olympics so far has been excellent and has won 5 matches so far, while losing only against Australia.

India defeated Great Britain in the quarter-finals to reach the semi-finals. (Photo: PTI)

The Indian men’s hockey team has made it to the semi-finals of the Tokyo Olympics 2020. The team of coach Graham Reid and captain Manpreet Singh has succeeded in taking India to the semi-finals of hockey after 49 years. India made it to the last-4 of men’s hockey for the first time since the 1972 Munich Olympics. Team India defeated Great Britain 3-1 in the last quarter final. India will face defending world champion and number one ranked team Belgium in the semi-finals. India has not won any medal in the Olympics since 1980 and this time the team is very close to the medal.

After the shock of a 1-7 defeat in the pool stage against Australia, the Indian team made a tremendous comeback and won 4 matches in a row and got a ticket to the semi-finals. Taking the lead in the first two quarters itself, the Indian team pushed Britain on the back foot. After this, the team maintained its hold on the match in the next two quarters as well. If the team’s forward line took the lead with a goal, the defense, especially veteran goalkeeper PR Sreejesh, helped it retain it through some excellent saves.

The first half was completely in India’s name, in which Team India scored one goal each in both the quarters. India started their attack from the first quarter itself and created many chances to break through the circle of Britain. India soon got the benefit of this too. Dilpreet Singh gave India the lead in the 7th minute. Dilpreet Singh, playing his 50th match for India, scored a field goal to lead India in the match. Five minutes later, Sreejesh blocked Britain’s equalization opportunity with a fine save.

The first quarter was 1-0 in favor of India and then the second quarter started well. In the 16th minute itself, Gurjant Singh made India’s lead 2-0. Shamsher Singh intercepted Britain’s pass and swiftly slid it towards Gurjant, who scored a brilliant goal to put India 2-0 ahead. The second quarter ended with India leading 2-0.

In the third quarter, the competition between the two teams was level. Although the British team trying to make a comeback in the match increased their attacks, but faced the Indian defense in the line. Just a minute before the end of the quarter, Britain got three consecutive penalty corners and in the third attempt, Britain broke the Indian goal and made the scoreline 2-1.

Britain’s attacks increased further in the fourth quarter and India did not get opportunities to attack. Britain also got penalty corners during this, Sreejesh stood like a wall and prevented the ball from going into the goal. However, India suffered a setback 7 minutes before the end of the match, when captain Manpreet Singh was shown the yellow card on a foul and India had to play with only 10 players for 5 minutes.

Britain’s attack increased in the last minutes, but the Indian team, grounded in the field with 10 players, made a tremendous counter attack and in the 57th minute, Hardik Singh scored a fine goal to make India’s lead 3-1. In the last 3 minutes, India did not allow Britain to score any more goals and sealed their place in the semi-finals with a thumping 3-1 victory. After 1980, the Indian team will present its claim for the medal for the first time.

Semifinals after 49 years, close to medal after 41 years