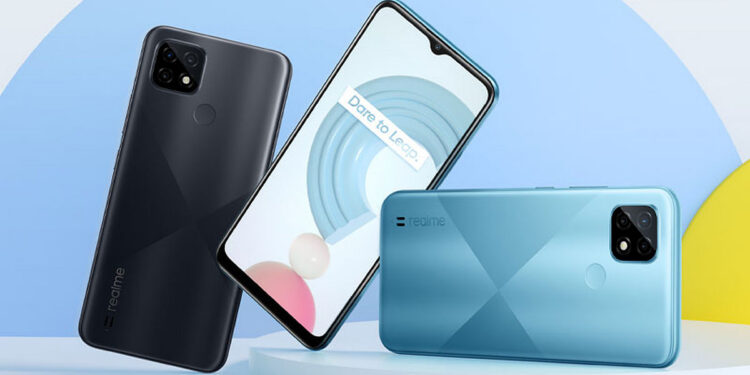 Realme C21Y smartphone can be launched in Vietnam soon, before the launch this phone has been listed on online retailer listing with full specifications. Tipster has shared a listing of the Realme C21Y, which will be the company’s first phone to run on Android (Go edition). This phone is listed with triple rear camera setup and it will have a notch design for selfie. Apart from this, it will have HD+ display and slim bezels. This phone will also be equipped with a fingerprint scanner, which will be placed on the back panel of the phone.

Tipster Chun (@chunvn8888) Tweet It has been informed that the Realme C21Y smartphone is going to be launched in Vietnam soon. At the same time, this will be the first smartphone of Realme that will work on the Go edition of Android, it can be Android 11 (Go edition). Along with this, Tipster has also shared the listing of the phone’s Vietnam website thegioididong.com. In this listing, information about all the specifications of the Realme C21Y smartphone is available. It is also revealed that this phone will knock with two color options which will be Black and Blue. However, information about the price of the phone has not been revealed at the moment.

The dual-SIM (Nano) Reality C21Y phone will run on Android 11, which the tipster claims will come with Android 11 (Go edition). Apart from this, according to the listing, the phone has a 6.5-inch HD + (720×1,600 pixels) display, with 420 nits brightness and 60 Hz refresh rate. Also, this phone will be equipped with octa-core Unisoc T610 processor, which will come with Mali-G52 GPU, 4 GB RAM and 64 GB storage.

For photography, you can be given a triple rear camera setup in Reality C21Y, whose primary camera will be 13 megapixels, apart from this you will get two 2-megapixel sensors. The phone will have a 5 megapixel camera for selfie and video calling. For connectivity, the phone will include 4G, Wi-Fi, Bluetooth v5, GPS / A / GPS, Micro-USB and 3.5mm headphone jack. Sensors will include accelerometer, ambient light and proximity sensor. A rear-mounted fingerprint sensor can also be given in the phone.

A 5,000 mAh battery will be given in the phone, with which 10 W fast charging support will be available. Apart from this, the dimensions of the phone will be 164.5x76x9.1mm and the weight will be 194 grams.

However, it is worth noting here that this information related to the Realme C21Y phone has not been confirmed by Realme, so in such a situation, these specifications can also be just rumours.