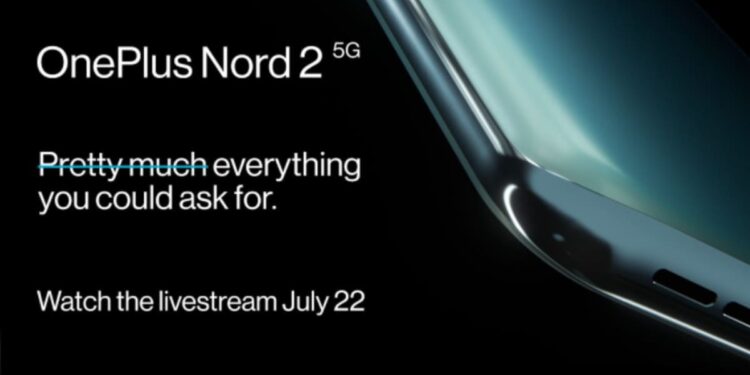 OnePlus Nord 2 and OnePlus Buds Pro will be launched in India today, July 22. This long event will start at 7.30 pm Indian time. Both these devices are being teased for the last few days, through which information about their design and specification has been revealed even before the launch. The OnePlus Nord 2 5G phone will be powered by the MediaTek Dimensity 1200-AI processor, which is an enhanced version of the standard MediaTek Dimensity 1200. Apart from this, recently the company has confirmed that this phone will be equipped with 4,500 mAh battery and will get Warp Charge 65 support. It has been informed about OnePlus Buds Pro that it will come with adaptive noise cancellation.

The launch event of OnePlus Nord 2 and OnePlus Buds Pro will start at 7.30 pm today. The event will be held virtually, which will be livestreamed on the company’s social media platforms and YouTube channel. You can also watch the launch event in the embedded video below.

In a recently revealed report, it was informed that the OnePlus Nord 2 phone will come in 8 GB RAM + 128 GB storage configuration, it will also have a 12 GB RAM + 256 GB storage model. The 8 GB RAM model of the phone will cost Rs 31,999, while the 12 GB RAM model of the phone can be priced at Rs 34,999. The OnePlus Nord 2 phone can be offered in four colors, which can be Red, Blue Haze, Gray Sierra and Green Woods.

OnePlus Buds Pro will be an upgrade of the existing OnePlus Buds. It is being speculated that the new Pro variant will be costlier than the Vanilla Oneplus Buds, which cost Rs 4,999. OnePlus Buds Pro can come in matte black color.

The OnePlus Nord 2 has been confirmed to receive two major Android updates. While this phone will get security updates for three years. The dual-SIM phone will work on OxygenOS 11.3. The smartphone will feature a 6.43-inch full-HD+ (1,080×2,400 pixels) Fluid AMOLED display with 20:9 aspect ratio, 90Hz refresh rate, and 410ppi pixel density. The phone will be equipped with MediaTek Dimensity 1200-AI processor. The phone will get 8 GB RAM + 128 GB and 12 GB RAM + 256 GB storage models.

Triple rear camera setup will be given in OnePlus Nord 2 phone for photography, whose primary camera will be 50 megapixels IMX766. With this, an 8-megapixel secondary camera and a 2-megapixel third camera will be present on the back. For selfie and video calling, a 32-megapixel selfie camera can be given in it, which will include features like Dual Video, Nightscape Ultra, Group Shot 2.0.

An in-display fingerprint sensor can be given in the phone. The phone’s battery will be 4,500 mAh with Warp Charge 65 fast charging support.

The upcoming OnePlus Buds Pro will sport an in-ear design, which is an upgrade over the OnePlus Buds that were launched last year. Kinder Liu, OnePlus’ head of research and development, has confirmed to CNET that the earbuds will come with adaptive noise cancellation. These earbuds will have three microphones, which will allow it to “intelligently produce noise-cancelling counter frequencies”. It can be adjusted.

Liu further said that the OnePlus Buds Pro will have up to 28 hours of battery life with the charging case and adaptive noise cancellation turned on. On the other hand, when the feature is turned off, these buds will provide up to 38 hours of battery life. Users can toggle noise cancellation via the touch controls on the earbuds or through the HeyMelody app. The charging case will come with a USB Type-C port, which will provide 10 hours of battery life with just 10 minutes of wired charging. It will support Qi-wireless charging at 1W speed. At the same time, its wired charging speed will be 10W.