Amazon Prime Day Sale: Up to Rs 35,000 off on laptops and great deals on phones like iPhone 11, OnePlus 9 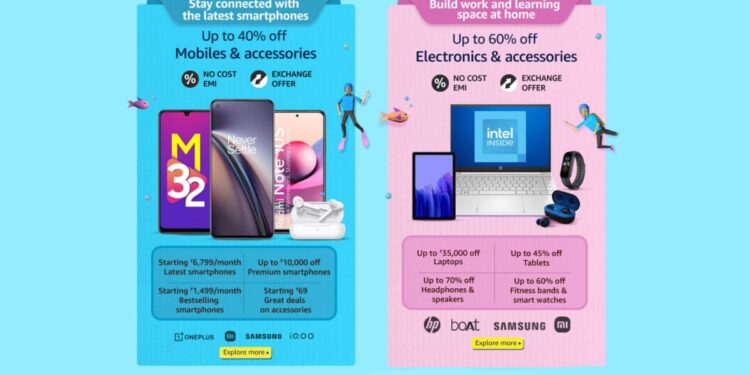 Amazon is going to organize an annual Prime Day shopping event from July 26 to July 27. The e-commerce website will bring many great deals and discount offers for Prime members during this two-day sale. Smartphones and electronics brands like OnePlus, Xiaomi, Samsung, Apple, HP, Sony, Amazfit and Lenovo are going to be a part of this sale. Amazon will offer up to 40 percent off on smartphones in this sale, while up to 60 percent off on electronics. Apart from this, a partnership has also been announced with HDFC Bank, under which HDFC cardholders can be given an additional 10 percent instant discount, which will include EMI transactions etc. Prime members will get 5 percent reward points on purchases made using Amazon Pay ICICI Bank credit cards during the Prime Day sale.

A discount of up to Rs 35,000 will be provided on laptops during the Amazon Prime Day sale. At the same time, up to 70 percent discount will be given on speakers and headphones. Up to 50 percent off on smartwatches, 75 percent on tablets and up to 50 percent off on printers. E-commerce claims that the sale will offer exchange offers, no-cost EMI and coupons in the consumer electronics segment. Apart from these, discounts will be offered on Fire TV Stick, Lenovo Tab M10 FHD, HP Pavillion Gaming laptop and Sony WF-100XM3 earbuds. Up to 65 percent off on TV sets and large appliances will also be available on Amazon Prime Day.<!–