ZIM vs BAN: Bangladesh send off Mahmudullah with victory, beat Zimbabwe by 220 runs 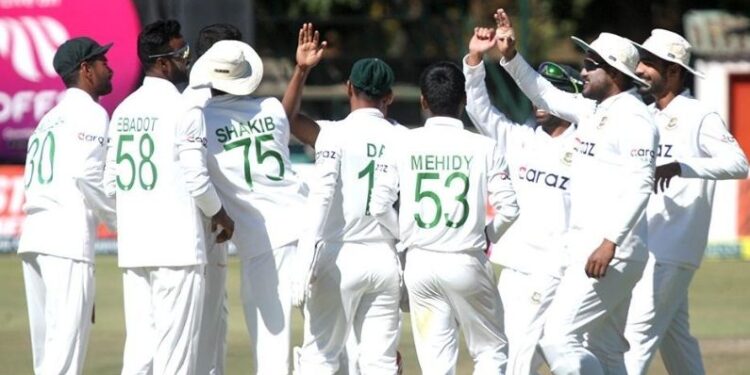 Bangladesh had scored 468 runs in the first innings itself, while Zimbabwe’s team could not cross the 300-mark even once in both the innings.

Bangladesh has now given a memorable farewell to veteran all-rounder Mahmudullah with a resounding victory. Bangladesh won the series by defeating hosts Zimbabwe by a huge margin of 220 runs in the first Test in Harare. On the last day of the match, Bangladesh bundled out Zimbabwe’s second innings for just 256 runs and achieved a massive 220-run victory. This is Bangladesh’s second biggest win in terms of runs. There were many heroes of Bangladesh’s victory, but the man of the match award went to Mahmudullah, who handled the team in difficult conditions in the first innings and helped them to create a big total with an unbeaten 150.

On the last day of the match in Harare, Zimbabwe needed 337 runs to win or needed to bat all day to draw the match, and had 7 wickets. Dion Myers and Donald Tiripano were at the crease. But Zimbabwe’s team could not succeed in either of the goals. Bangladesh pacer Taskin Ahmed and spinner Mehdi Hasan Miraj played a key role in demolishing Zimbabwe’s innings on the last day. Both the bowlers took 4-4 wickets.

Defeated in the first session itself

Zimbabwe started their innings on the fifth day with a score of 140/3, but lost 4 wickets in the first session itself. Mehdi Hasan and Taskin decided Zimbabwe’s defeat by dropping 4 wickets in 4 consecutive overs. However, Tiripano stuck to the other side and single-handedly kept the team’s score forward and completed his fighting half-century in the second session. However, they did not get along much with others. In the end, number 10 batsman Blessing Mujarbani made an unbeaten 30 and made a small partnership and reduced the margin of defeat, but the entire innings was reduced to 256.

Earlier, Bangladesh had scored 468 runs in the first innings with the help of 150 runs from Mahmudullah and half-centuries from Liton Das (95) and Taskin Ahmed (75). In reply, Zimbabwe’s first innings was reduced to just 276 runs. Taking a massive lead of 192 runs, Bangladesh scored 284 runs in the second innings for the loss of just 1 wicket, which included centuries from Shadman Islam (115 not out) and Najmul Hossain Shanto (117 not out) and Zimbabwe got a target of 477 runs. .