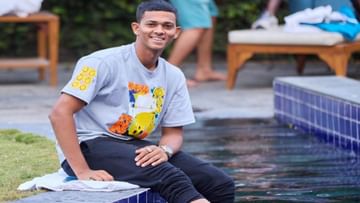 Yashasvi Jaiswal used to live in a tent on the grounds of Mumbai during his days of struggle. Mudassir Khan also lived in the same tent with him, who is correcting the bat in a corner of the same ground today.

Yashasvi Jaiswal and Mudassir Khan have lived in a tent

Many budding players come to Mumbai with the dream of becoming a big player. Some of them become stars, but the dreams of many budding players remain unfulfilled and those whose dreams are not fulfilled, only a few faces are seen in the coming years in some corner of the same stadium. To be connected to the game in one way or the other. One such name is Mudassir Khan, who came to Mumbai from Azamgarh in UP to become a cricketer, but today he is correcting players’ bats in a corner of Azad Maidan. He is also a friend of Yashasvi Jaiswal.

Mudassir has lived in a tent with India’s star young batsman Yashasvi Jaiswal. Not only this, he has also made Steve Waugh crazy with his work. In an interview given to Sports With Taus, Mudassir talked about his struggle.

the only bread earner in the house

Mudassir said that he had come to Mumbai to become a cricketer. He also played here for a few years, but after that the circumstances became such that he started repairing the bat. He had learned this work from his maternal grandfather. Nana’s age had also increased and he was the only earner in the house. In such a situation, he had to leave everything and earn and now he has started enjoying this work.

Mudassir said that sometimes he feels like leaving something and playing, but work is also necessary. Now his dream is to make a bat for a big player. Recalling the time spent with Yashasvi Jaiswal, Mudassir said that both used to live in the same tent. Used to eat food together.


Yashasvi had a different passion

Mudassir said that Yashasvi had a different passion for cricket right from the beginning. Today he has gone ahead, so it is a great pleasure to see him. Even today we keep talking to Yashasvi. Even Steve Waugh is a fan of Mudassir’s work. A few years ago, when Waugh came to this ground, he stopped to see Mudassir’s work and praised his work a lot. Waugh also gave a bat of his autograph to Mudassir.