WTC Final: Mohammad Siraj gets a place in the final, former veteran’s advice – sacrifice this senior 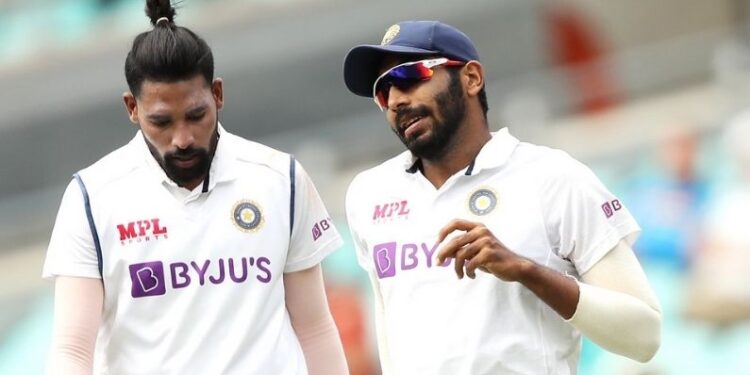 The Indian team has many options for fast bowling and Team India will go with at least 3 fast bowlers for this match.

Mohammad Siraj made his debut in the Melbourne Test on Australia tour.

There is a constant discussion on what should be the playing XI of Team India for the ICC World Test Championship Final. What is going on inside Team India, it has not yet come out in the open, but a report has claimed that the Indian team management is trying to somehow fit the fast bowler Mohammad Siraj in the playing XI. is trying. For this, whether a fast bowler will be sacrificed or a spinner, it will be clear in a few days. In this case, former Indian spinner Harbhajan Singh is also in favor of including Siraj and for this he has suggested to the Indian team that veteran pacer Ishant Sharma should be seated.

Siraj made his debut on Australia tour last year with the second Test match in Melbourne. He took 5 wickets in an innings in the last match of the series in Brisbane and proved to be India’s most successful bowler in just 3 matches of the series. On the other hand, Ishant Sharma has been battling injury for a long time. Ishant played his last Test on the tour of New Zealand, where he managed to take 5 wickets in an innings, but was ruled out due to injury.

Harbhajan Singh stated his choice to include Siraj in the playing XI and preferred him over Ishant, who played 100 Test matches. Harbhajan Singh was quoted by news agency PTI as saying, “If I am the captain, I will play three fast bowlers. So Jasprit Bumrah and Mohammed Shami will be sure. In this final I would like to take Mohammad Siraj instead of Ishant Sharma. Ishant is a fantastic bowler but my choice for this match is Siraj who has shown great improvement in the last two years.

The veteran Indian off-spinner has argued that Siraj will be more effective due to his current form and search for opportunities. He said, “You should look at the current form. Siraj’s form, pace and confidence make him a better option for the final match. Looking at the form of the last six months, he looks like a bowler who is hungry for opportunities. Ishant has had to deal with some injuries in the recent past, but he has been a great asset to Indian cricket, no doubt about it.”

This specialty of Siraj will trouble New Zealand

Talking about Siraj’s specialty, Harbhajan, popularly known as ‘Turbanator’ and has got more than 400 Test wickets, said, “Siraj will be dangerous at his own pace if you leave some grass on the pitch. Trust me, it will not be easy for the New Zealand batsmen to play him as he moves the ball ‘off the pitch’ with his speed. He can bowl in difficult angles for the batsmen.

The Indian team has the option of 6 leading fast bowlers for this tour. Jasprit Bumrah and Mohammed Shami are set to play. Apart from these, the challenge of choosing one or two from Ishant Sharma, Mohammad Siraj, Umesh Yadav and Shardul Thakur will be in front of the Indian team.

Also read: Team India announced for Sri Lanka tour, made this legend captain, many young stars of IPL got reward