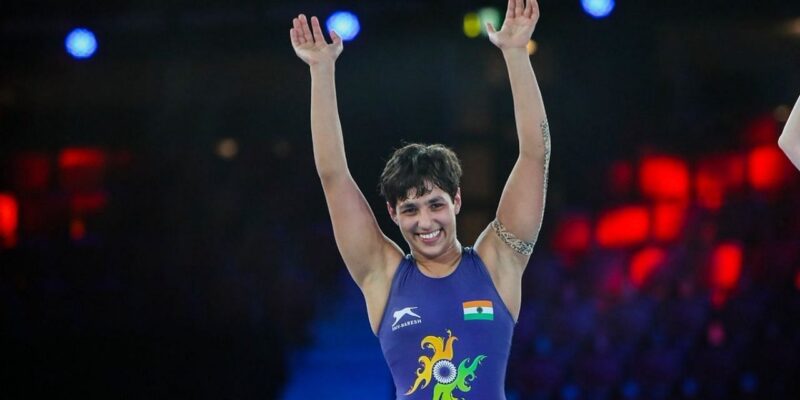 India’s Anshu Malik has created history in the World Wrestling Championship being played in Norway. She has been successful in winning silver medal in this tournament. Anshu was defeated 4-1 by Tokyo Olympic-2020 bronze medalist Helen Louis Maroulis of America in the final and with this she managed to win the silver medal in the 57 kg weight category. With this, she has become the first female wrestler from India to win a silver medal in this championship.

Before Anshu, four women wrestlers from India have won medals in the World Championships but all have got bronze. Geeta Phogat won the bronze in 2012, Babita Phogat in 2012, Pooja Dhanda in 2018 and Vinesh Phogat in 2019. Anshu is the third Indian to reach the World Championship finals. Before him, Sushil Kumar (2010) and Bajrang Punia (2018) have done this amazing. Of these, only Sushil could win gold.

19-year-old Anshu, who became India’s first female wrestler to make it to the finals of the World Championships, started off aggressively and positively. She was leading 1-0 after the second period but Helen dominated the second period. Helen caught Anshu’s hand and then took a 2-1 lead with a takedown move. She did not let go of Anshu’s right hand and went 4-1 ahead with two more points. Defending Asian champion Anshu looked in pain but the American wrestler didn’t let his grip slackened and won by beating the Indian wrestler. Anshu had to seek medical help immediately after the match and tears were visible in his eyes.

Such was the journey till the final

Anshu Malik created history as soon as he made it to the final on Wednesday. She became the first woman wrestler from India to reach the final in this weight category. She defeated junior European champion Solomiya Vink of Ukraine in the semi-finals. He defeated his opposition 11-0 in a one-sided match. Nineteen-year-old Anshu dominated the semi-finals from the very beginning and won on the basis of technical superiority to reach the final of the 57kg category. Before reaching the final, India’s young Anshu Malik defeated Kazakhstan’s Nilufar Remova on technical prowess in a one-sided match and then defeated Mongolia’s Devachimeg Erkhembayer 5-1 in the quarter-finals.

Divya Kakran (72kg) lost her repechage bout in the morning session. He was defeated by Davanasan Ankh Amar of Mongolia. Greco-Roman wrestlers once again put up a disappointing performance which is not surprising. Sandeep (55kg), Vikas (72kg), Sajan (77kg) and Harpreet Singh (82kg) bowed out of the competition. Only Sajan managed to win one match while the other three wrestlers lost their first match.

Lok Sabha Speaker Om Birla’s advice to Britain, no country should raise the issues of other countries in its Parliament

IPL 2021 Purple Cap: Harshal Patel continues to shine, no one in the race far and wide