Wonderful! The captain came to toss by sitting on a mare, got the team to win the stormy fifty 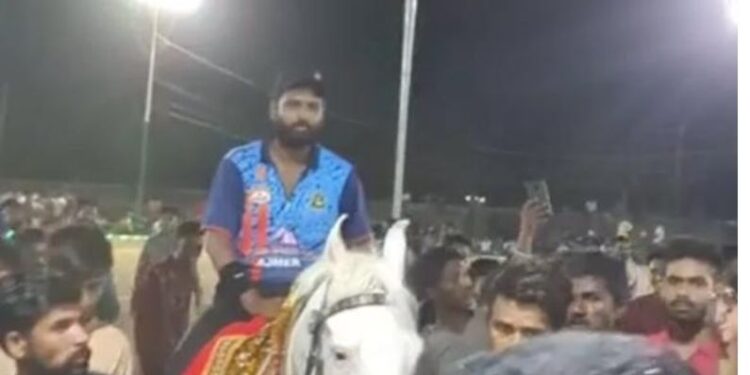 This Knight Trophy being played in Nagaur district started before the lockdown and then had to be stopped. just started again

The captain came to toss by sitting on the mare

If there is any most popular sport in India, then it is cricket. In this country this sport is considered like a religion. Playing cricket in every street, you will meet from child to elder. This game is so famous that small cricket tournaments are organized in many places in India. Tournaments are held during the day, but there is also a lot of craze for night tournaments. Tournaments are played with tennis ball and also with plastic ball. One such tournament is being played in Nagaur district of Rajasthan. Usually such tournaments are able to make a place in the local newspapers and they are not discussed outside the city or village, but in the cricket tournament being played in Nagaur district, such an interesting incident happened that it attracted everyone’s attention. took

This incident happened shortly before the start of the match and everyone was surprised when it happened. Surprised because it was probably happening for the first time. Usually this is not seen. Yes, this happens in marriage. You must be thinking what is it that has come when it comes to marriage. Actually, a match of a night cricket tournament was played in Burabar town of Nagaur district. There was to be a toss before this match. Both the captains were called. Both the captains were waiting. Then the captain of a team appeared on the mare. He came on a horse for the toss. The captain came for the toss sitting on a white colored mare. When the captain was coming on a mare for the toss, drums and drums were also playing with him and people were dancing like a procession.

In this tournament, Leelan Cricket Club of Ajmer came to play. Which was faced by the team of Alwar. There was to be a toss in the match when the captain of Leelan Cricket Club Sakir Khan came for the toss on a white mare. As soon as the captain was seen on the mare, people were surprised. Started wondering what is happening. Soon the pictures of the captain sitting on the mare started being taken out. A crowd gathered around the captain and everyone was laughing with surprise.

Toss happened twice in this match. When the coin was tossed for the first time, it went in the midst of the people standing nearby. Then the toss was done again which was won by the captain of Alwar. Sakir, the captain of Leelan Cricket Club, played an innings of 80 runs in 23 balls in this match and led his team to victory. This knight trophy started before the lockdown and then had to be stopped. Has just started again. Teams have come from all over Rajasthan in this.

After four years, the Australian team will go on a tour of this country, will play its first bilateral T20 series