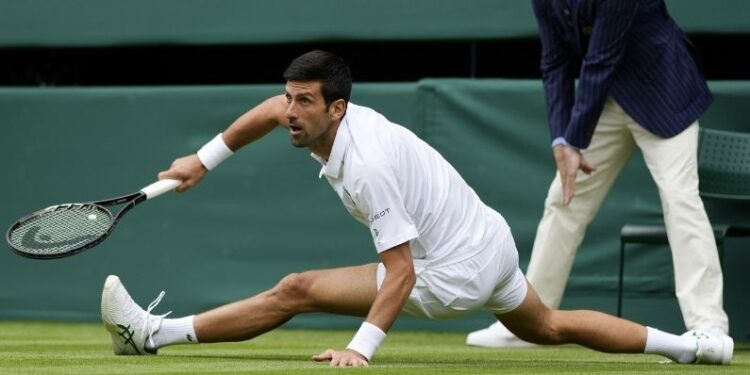 Novak Djokovic, who was trying for a third consecutive Wimbledon title, did not have as much trouble with the opponent as he did with the slippery court, in which he once stood murmuring in despair.

Novak Djokovic is preparing to win the Wimbledon title for the third time in a row.

Serbian star Novak Djokovic advanced to the third round of the Wimbledon Tennis Grand Slam with a 6-3, 6-3, 6-3 win over Kevin Anderson on Wednesday. Djokovic slipped and stumbled several times on the grassy courts of Wimbledon, but he did not face a single break point and made only six simple mistakes. But again on the third day of the tournament, he continued to have problems with his feet and slipped several times, as it happened with other players in other matches. Djokovic, who was trying for his sixth and third consecutive Wimbledon title, did not have as much trouble with Anderson as he did with the slippery court, in which he once stood murmuring in despair. If Djokovic wins the Wimbledon title this time, he will equal Federer and Rafael Nadal’s record of 20 major trophies.

At the same time, in the women’s section, Elije Cornet of France defeated fifth seed Bianca Andreescu. Cornet defeated Andriscu for the second time in two weeks. He broke former US champion Andreescu’s serve five times and defeated the Canadian 6-2 6-1. Cornet had also defeated Andriscu in Berlin two weeks ago. After losing the match in the first round, Bianca Andreescu said, ‘I did not slip only once, but I slipped six times. The court is very slippery. I have played here only once but those courts were not like that at all. When I talked to many other players also, they said that this is not so common. But we cannot do anything about it.

Serena also got hurt due to slipping

Seven-time champion Serena Williams had to pull out of a first-round match on Tuesday after suffering a foot injury after slipping. Roger Federer’s rival Adrian Manarino had to withdraw due to a knee twist after a fall. The court became slippery due to incessant rain for the first two days of the game. Due to the weather, the schedule of matches was thrown out due to which 27 matches of the first round were shifted till Wednesday. On June 30, French Open runner-up and 16th seed Anastasia Pavlyuchenkova advanced to the second round with a 6-2 6-2 victory over Ana Bogdan in an hour. Camilia Giorgi and 19th seed Karolina Muchova also advanced to the second round.

read this also: Lionel Messi’s contract with Barcelona ends, no one knows what will happen next, has been with this Spanish club for 17 years