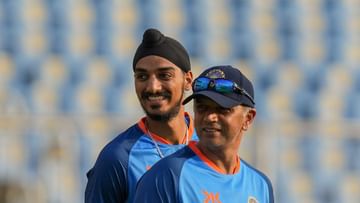 After the ICC T20 World Cup, it was told in several media reports that the BCCI is considering appointing separate captains in ODIs and T20s.

After the ICC T20 World Cup, there were reports of appointing different captains in the limited overs in the Indian cricket team. It was told in several media reports that the Board of Control for Cricket in India (BCCI) is considering appointing separate captains in T20 and ODIs. This also happened when Hardik Pandya was appointed as the captain in the T20 series against Sri Lanka and New Zealand. When the team coach Rahul Dravid was asked about the appointment of different captains, he gave such an answer which caused confusion. has stood up.

After the T20 World Cup, Pandya was made the captain of the T20 team on the New Zealand tour and then it was clarified by the BCCI that Rohit Sharma has been rested. But when Pandya was made the captain in the T20 series played against Sri Lanka earlier this year and nothing was told about Rohit, it was almost clear that Pandya has been given the command of the T20 team.

I do not know

At present, Team India is playing a three-match ODI series against New Zealand at home. The last ODI of this series will be played in Indore on Tuesday. When Dravid came to the press conference before this match on Monday, he was asked a question about appointing different captains. To which Dravid said, “I do not know about it. That’s a question you should be asking the selectors but as of now I don’t think so.”

Due to Dravid’s statement, a situation of confusion has arisen as to which planning the BCCI is working with. Because the situation is not clear to the coach of the team itself. In the same press conference, Rahul also made it clear that Rohit, KL Rahul and Virat have been rested from T20s. From this it seems that Pandya has not yet been fully handed over the command of the T20 team. However, he has definitely been made the vice-captain of the team in ODIs.

Dravid accepted the matter of change

There is another reason for confusion and that too is Dravid’s statement. Earlier this month, Dravid himself had said that the Indian T20 team was going through a transition phase and needed to exercise restraint. At the same time, Rohit had said that he has not decided about his future in T20 cricket. Rohit said this month, we have to play three T20s against New Zealand. Let’s see what happens after IPL. I have not decided to leave the format.

Players will not go for Ranji Trophy

The Ranji Trophy quarter-finals are to be held from January 31 and the practice camp for the Test series against Australia will begin from February 2. No member of the Indian team will be released to play the Ranji quarter finals. Dravid said, we wanted boys to play but it was a difficult decision for us. We will not be able to drop any player but if after the start of the series there is a need for semi-finals or finals and that player is not playing then we can think.