WI vs SA: South Africa’s ‘new-old captains’ showed their strength, scored 218 runs on the first day of the second Test against West Indies 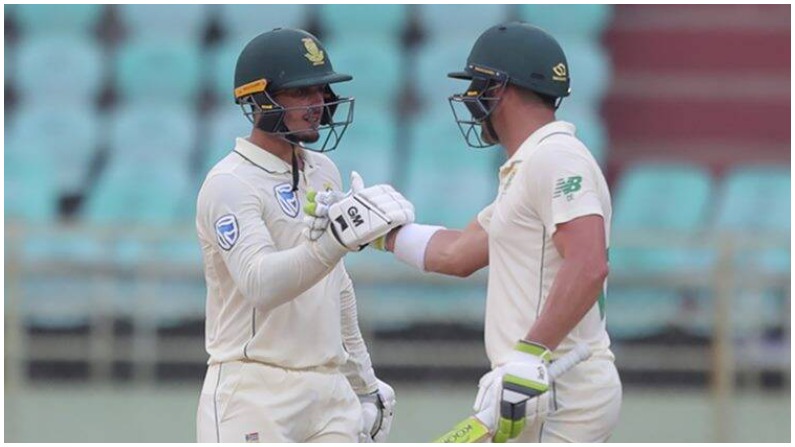 After winning the first Test by an innings and 63 runs, South Africa started the second Test well. On the very first day of this Test match, the strength of the new and old captains of South Africa was seen.

South Africa team is on West Indies tour. The second Test of this tour also started from the same day. From the day the final of the ICC World Test Championship (ICC WTC Final 2021) was to be held here in Southampton. It rained in both the countries. But because of that, the first day of the second Test in the West Indies started just a little late. At the same time, the first day of the great match between India and New Zealand in Southampton was completely washed away. After winning the first test match by an innings and 63 runs, South Africa have started the second test well. On the very first day of this Test match, the strength of the new and old captains of South Africa was seen.

South Africa’s new captain i.e. Dean Elgar, who went into the opening and scored 77 runs in the first innings of the second Test. So the old captain of South Africa i.e. Quinton de Kock, who not only handled the crumbling innings of the team by landing in the middle order. Rather, scoring an unbeaten 59 on the first day, he is standing at the crease.

In the first innings of the second Test against West Indies, South Africa scored 218 runs for the loss of 5 wickets at the end of the first day’s play. Dean Elgar and Quinton de Kock played a big role in getting him to this point, who added 79 runs in 169 balls together in the team’s score board for the 5th wicket. This partnership was broken by the dismissal of Elgar, who was clean bowled by Kyle Meyers.

Due to rain, only 82 overs could be played in the first day’s play. In the match, South Africa did not start as it should have. His 3 wickets had fallen for just 37 runs before lunch. But then captain Dean Elgar played the captaincy innings and added 82 runs to the score board with Veran for the fourth wicket. This partnership rescued the team from the crisis, which was further strengthened by the partnership of Dekock and Elgar.

Dekock not out, will score a century today!

However, Elgar has returned to the pavilion after the captaincy innings. In such a situation, now all the hope is related to de Kock. He is currently unbeaten and today, on the second day, he will play for longer. Equally good for South Africa.

Also read: ICC WTC Final: This Indian legend warns Team India, do not make this mistake even after forgetting against New Zealand