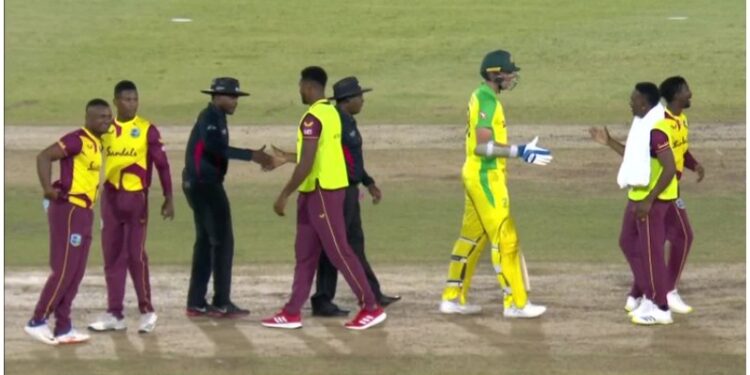 Australia had a challenge of 200 runs to win this match. But these runs did not come from him. Because after the havoc of Caribbean Lewis with the bat, his two bowlers became a disaster for the Kangaroo team with the ball.

West Indies have won the 5 T20 match series 4-1 over Australia. Although the Caribbean team had already won the series by winning the first 3 matches. Australia then came back with a win in the fourth T20 and dashed the hosts’ hopes of a clean sweep. But, once again in the 5th and last T20, West Indies had the upper hand. The host did not allow one of the visiting team to run. Kangaroo looked breathless in front of Caribbean Dum at both the ends of the ball and the bat. Its 3 players Russell, Lewis and Cottrell played a big role in West Indies’ victory in the 5th T20.

In the match, West Indies batted first and scored 199 runs for 8 wickets in 20 overs. For West Indies, his opener Evin Lewis scored the most runs, who maintained his red hot form with a blistering innings of 79 runs off 34 balls. Lewis’s innings of 54 minutes included 9 sixes and 4 fours. Apart from Lewis, Gayle scored 21 runs in 7 balls. Nicholas Pooran scored 31 runs in 18 balls. Andrew Tye was the most successful bowler for Australia, taking 3 wickets for 37 runs in 4 overs.

200 not scored by Australia

Australia had a challenge of 200 runs to win this match. But these runs did not come from him. Because after the havoc of Caribbean Lewis with the bat, his two bowlers Cottrell and Russell Kangaroo became a disaster for the team with the ball. Both Cottrell and Russell took 3–3 wickets in the match to form their team’s winning streak in the 5th T20I. Captain Finch scored the highest 35 runs in the run chase for Australia. After this, Inform Mitchell Marsh played an innings of 30 runs in 15 balls.

Caribbean opener Evin Lewis was adjudged the player of the match for his explosive innings of 79 runs, while Hayden Walsh, who took the highest 12 wickets in the series, was awarded the Man of the Series title.