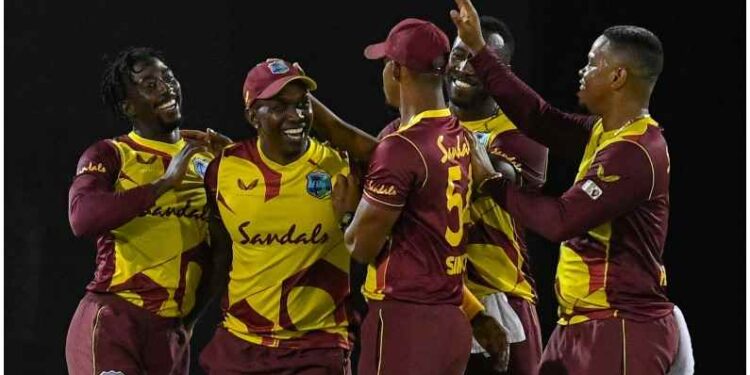 Although a five-match T20 series is being played between the host West Indies and Australia’s cricket teams, the Windies have already decided the series by winning the first three matches.

Chris Gayle gave victory to the team by scoring a brilliant half-century in the third match.

The West Indies team has finally shown why it is counted among the most dangerous teams in the world when it comes to T20 cricket. Under the captaincy of Nicholas Pooran, the Windies team has won the five-match T20 series being played against Australia. Meaning the team has taken an unassailable lead in the series by winning the first three matches. In the third T20 played on Tuesday, with the help of Chris Gayle’s stormy and historic half-century, West Indies registered a strong victory over Australia by 6 wickets and that too when 31 balls were left in the match. In the first T20 match, West Indies won by 18 runs, while in the second T20 they won by 56 runs.

In this match, the Australian team, captained by Aaron Finch, batted first. The team scored 141 runs for the loss of 6 wickets. In which the maximum 33 runs came out from the bat of Moises Henriques, who landed at number five. He hit two sixes in his innings of 29 balls. Apart from him, Captain Finch scored 30 runs in 31 balls with the help of two fours. Ash Turner contributed 24 runs in 22 balls and opener and wicketkeeper batsman Matthew Wade contributed 23 runs in 16 balls. Hayden Walsh took two wickets for 18 runs in 4 overs for the West Indies.

Such was the explosive batting of West Indies team

In response, West Indies got the first blow for 4 runs, but after that Chris Gayle took the lead. When Lendl Simmons was out as the second wicket, the team’s score was 42 runs. After this, there was a 67-run partnership for the third wicket between captain Nicholas Pooran and Gayle. During this, Gayle scored the initial 32 runs in 28 balls but after that when he was out, he had scored 67 runs in 38 balls. He hit 7 sixes and 4 fours during his innings. Dwayne Bravo, who came after Gayle’s dismissal, got out after scoring 7 runs. After this, Russell and Pooran gave the team victory in 14.5 overs at the loss of four wickets. In the end, Andre Russell scored 7 runs off a ball from Riley Meredith. This third ball of the 15th over was a no-ball, on which Russell hit a six. Nicholas Pooran returned unbeaten on 32 off 27 balls. He hit four fours and a six.