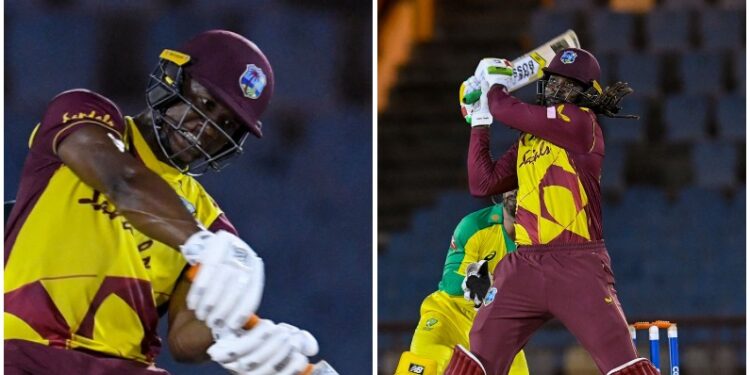 Gayle and Lewis made that slaughter in just 17 balls that a new record of sixes was made on sight. Together they scored 90 runs in 17 balls.

It is said that whether the explosion is small or big, what does it matter? It means that how strong is its effect. In the 5th T20 against Australia, Chris Gayle’s blast was small, but its noise resonated with full force. At the same time, the explosion of Evin Lewis was big. Both the Caribbean batsmen created a loot of runs. In just 17 balls, he created a massacre that a new record of sixes was made on sight. Gayle and Lewis together scored 90 runs in 17 balls.

West Indies, who came to bat first in the match, scored 199 runs in 20 overs, in which 79 runs came off the bat of Evin Lewis alone. Lewis scored these runs in 34 balls at a strike rate of 232.35. His innings included 4 fours and 9 sixes. Meaning he scored 70 runs of his explosive innings in just 13 balls. This is the 9th half-century of 29-year-old left-handed batsman Lewis’s T20 International career.

Gayle’s small blast also has a lot of effect

A small but effective explosion was also done by Chris Gayle with this big bang of Louis. His innings was of just 7 balls, in which he scored 21 runs at a strike rate of 300. But, during this time, by showing sixes and fours on the first 5 balls itself, he indicated the arrival of Gayle Strom. Fortunately for Australia, the storm did not get too big, but Gayle definitely spoiled the game of Australia spinner Adam Zampa. Gayle scored 20 runs in his short but strong innings from the boundary in just 4 balls.

In this way, if the boundaries of Gayle and Lewis are combined, then both of them have brought the ball across the boundary line 17 times. In this 11 times he took it by air and 6 times by land. While doing this, both have scored 90 runs for the team from 17 boundaries. With this effort, West Indies have also broken India’s record of sixes made 3 years ago. West Indies team has hit 127 sixes in T20 so far this year, which is a new record. Earlier in the year 2018, India had hit 122 sixes in T20. Not only this, Lewis has now become the batsman to hit the most number of sixes in an innings against Australia along with Martin Guptill of New Zealand.