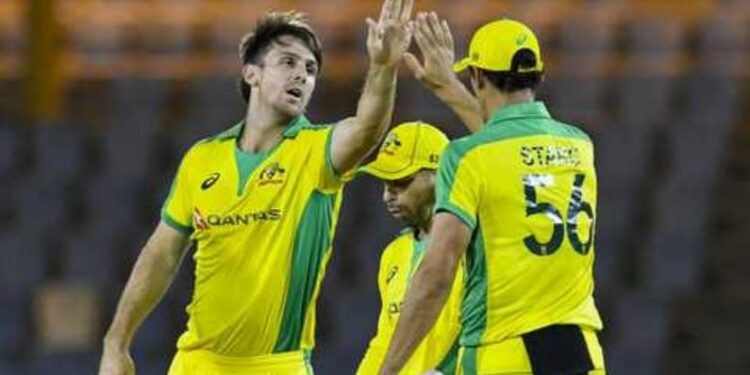 Australia had already lost the series by losing 3 wickets in the five-match series, but in this match the team’s captain Aaron Finch also returned to form and played a good innings.

Mitchell Marsh showed a great all-round game, then Mitchell Starc tied Russell in the last over.

Generally nothing is impossible in T20 matches. Be it big goals or stormy innings. Or 11 runs needed in the last over. And if there is a batsman like Andre Russell in front, then anything is possible, but sometimes bowlers also win. Just like Australian fast bowler Mitchell Starc did. Australia, which had lost the first 3 matches of the T20 series, registered its first win in the fourth match by defeating West Indies by a close margin of 4 runs in a thrilling match. Two Mitchells were the heroes of Australia’s victory – Mitchell Marsh and Mitchell Starc. Both these players pulled the team out of difficult situations and tasted victory.

The Australian team, who had already lost the five-match series, needed a win in this match and batting first, they scored a good score of 189 runs in 20 overs for the loss of 6 wickets. Most of the Australian team’s batsmen failed this time too, but captain Aaron Finch played a good innings after the failure of three consecutive matches. At the same time, all-rounder Mitchell Marsh continued his excellent form and scored his third half-century in the series.

Both the batsmen took over Australia after the first wicket fell for just 12 runs in the form of Matthew Wade (5). Marsh started batting indiscriminately as soon as he arrived, while Captain Finch played cautiously in the beginning and then got some runs from the pace. The two put on a scintillating partnership of 114 runs for the second wicket. This partnership was broken by Heidel Walsh Jr. by dismissing Finch (53 runs, 37 balls, 5 fours, 3 sixes). At the same time, Marsh hit a half-century in just 24 balls at the speed of the storm. He got out after hitting 75 runs (4 fours, 6 sixes) in 44 balls. For the West Indies, the spinner Hayden Walsh was the most successful and took 3 wickets for 27 runs in 4 overs.

Meanwhile, after setting color with the bat, Mitchell Marsh also showed amazing with the ball. Marsh first made Chris Gayle (1) his victim. After that, captain Nicholas Pooran and the dangerously proving Lendl Simmons (72 runs, 48 ​​balls, 10 fours and 2 sixes) got their team back. Marsh took 3 wickets for 24 runs in 4 overs. However, Fabian Allen and Andre Russell tried their best to snatch the match from Australia. Allen hit three consecutive sixes on Riley Meredith in the 19th over.

West Indies needed 11 runs in the last over. Andre Russell was on strike, but Mitchell Starc bowled brilliantly and did not allow a single run in the first 5 balls. Russell hit a six on the last ball, but the Windies team could only score 185 runs for the loss of 6 wickets and lost the match by 4 runs. Russell returned unbeaten on 24 runs in 13 balls.

Also read: CPL 2021 will start from August 26, Windies Cricket Board has released the schedule, the final will be played on this day