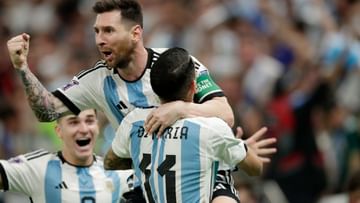 A total of 8 goals were scored on Day 7 of the FIFA World Cup 2022. Where once again the glory of Lionel Messi was seen. Messi has almost saved his team Argentina from getting out.

The excitement of the FIFA World Cup is raising everyone’s head. A total of 8 goals were scored in 4 matches in the FIFA World Cup on the 7th day of the tournament, but the most important of these 8 were the goals of Lionel Messi, Enzo Fernandez and Robert Lewandowski. Messi did a great job. He not only scored a wonderful goal, but also assisted. On the 7th day of FIFA World Cup 2022, the match was played between Tunisia vs Australia, Poland vs Saudi Arabia, France vs Denmark and late night Argentina vs Mexico.

See the highlights on FIFA+

France won the third match of the day by 2-1. Kylin Embappé scored both goals. He scored goals in the 61st and 86th minute. While Andres Christian scored in the 68th minute. Embappé scored the winning goal in the last minute to take France to the round of 16.

Onto the next! France’s 2-1 win over Denmark moves them onto the round of 16.

🎥 Watch the match highlights on FIFA+

Argentina won the last match of the day by 2-0. The whole world was eyeing this match. The Lionel Messi-adored team was in danger of being eliminated, but Argentina kept their hopes alive by winning over Mexico. Messi dominated in this match. In the 64th minute, Messi scored a goal from a long distance to give the team a 1-0 lead. After this, Messi again did wonders in the 87th minute and this time assisted, due to which Fernandez was able to score. This is Fernandez’s first goal in the World Cup.