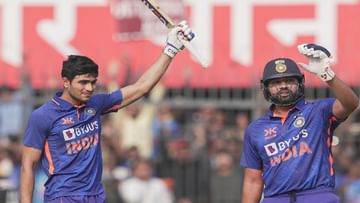 Shubman Gill scored a century again in Indore. Head coach Rahul Dravid said after the match – don’t get out before Rohit and Virat.

Shubman Gill did wonders in the ODI series against New Zealand. This player scored the maximum 360 runs in the ODI series. In the first match, Gill scored a double century, while in the second ODI he managed to score a half-century. In the last match, this player again scored a century. After the stormy batting of Shubman Gill, this player received the Player of the Series award. By the way after Indore ODI Shubman Gill Wonderful advice was given by head coach Rahul Dravid. The head coach told Shubman that you have to beat Virat and Rohit.

Let us tell you that Shubman Gill batted brilliantly in the ODI series. He was seen batting in a different style. Along with scoring 360 runs, his strike rate was also more than 128. Maximum 14 sixes, 38 fours came out of his bat. Gill was generally considered a classic batsman but in this series he showed his explosive style.

Shubman Gill gave the credit for this to the trust of the team. Gill told Rahul Dravid that during the ODI series against Sri Lanka, he felt that Ishan Kishan would get a chance because he had scored a double century in Bangladesh but the team management gave him a chance. Gill said that this gave him courage and courage and he played freely.

Let us tell you that Shubman Gill had scored at an average of more than 70 last year and this time he remains number 1 in every respect in the ODI format. Shubman Gill has scored 567 runs in 6 matches played this year. His average is more than 113. This player has scored 3 centuries and one half-century this year. One of which is a double century. Gill scored 208 runs in the first match against New Zealand and became the youngest player to score a double century.