Who would have been hurt the most by Shubman Gill’s century, whose heart was broken? 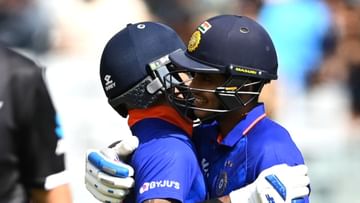 Shubman Gill has not only made his place in India’s ODI team within the last 6 months, but has almost confirmed it with his third century.

Shubman Gill has confirmed his place in Team India by scoring a century against New Zealand.

The time of October-November 2023 will be very important for the cricket world. Reason- ODI World Cup, which is to be held in India. All the teams are busy preparing for this World Cup and the Indian team is also in it. Team India has also started it well. especially Shubman Gill The beginning of preparations for the World Cup this year has been tremendous and gradually this young batsman is cementing his place as an opener. However, if their place is getting confirmed, then on the other hand someone else’s dreams are being shattered.

Shubman Gill scored a century while playing an excellent innings in the first ODI against New Zealand in Hyderabad on Wednesday, 18 January. This was Gill’s second consecutive century and overall third ODI century. With this century, Gill also broke the Indian record of Shikhar Dhawan and Virat Kohli (both in 24 innings) for the fastest 1000 ODI runs. Apart from this, Gill (19 innings) also completed the fastest 3 ODI centuries for India after Shikhar Dhawan (17 innings).

Gill, however, is not only breaking Dhawan’s records, but is also breaking the remaining hopes and dreams of the experienced Indian batsman with his every innings. Dream- To play and win the World Cup in your country. Expectation- Somehow make it to Team India for your last World Cup. With two consecutive centuries and a rain of runs, Gill has probably completely pulled the curtain on these two.

Dhawan, who has been India’s most successful opener and formidable partner with Rohit Sharma in ODI cricket for nearly a decade, was dropped from the ODI series on Bangladesh tour last year. Last year was very bad for Dhawan. Not only was he failing to score runs, but the runs that did come, their speed was also very slow.

The last 6 months proved to be the most important for Gill, who made his ODI debut in 2019, and coincidentally during this time he continued to handle the responsibility of opening in many ODI series with Dhawan. In these series and innings itself, his place kept slipping from Dhawan’s hand, while Gill confirmed Dhawan’s place in front of him. While opening with Dhawan, Gill scored his first ODI century on the tour of Zimbabwe, while before that he was dismissed for 98 in a match against the West Indies. Since then, Gill has been raining runs continuously.