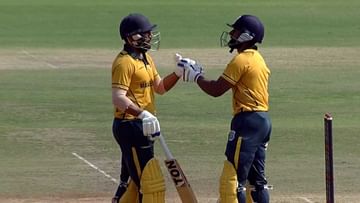 Maharashtra and Saurashtra will clash in the final

Vijay Hazare Trophy Who’s the champion? The question is big. But the answer is going to come in the next few hours. The final match is in Maharashtra and Saurashtra. Maharashtra This will be the first final of the team. There itself Saurashtra This will be the third chance for Vijay Hazare to play in the final. So it is going to be fun to watch the final of this 50-over tournament. Of course, Saurashtra has the experience of playing finals behind. But his current form is with Maharashtra. His players, especially Rituraj Gaikwad’s bat, are in trouble.

Now this time Vijay Hazare Trophy will get a new champion or the team that became the first champion will again lift the title, it will soon be in front of everyone. This will be Saurashtra’s third final. Earlier, once in the year 2007-08, they had won the title by defeating Bengal. Whereas in the year 2017-18, he was defeated in the final of Vijay Hazare Trophy by Karnataka.

This is how Maharashtra-Saurashtra won in the semi-finals

That’s that from Semi-Final 1.


Enthused by the victory, will be seen in the final

Before registering victory in the semi-final match, both these teams were on top of their respective groups even at the group stage. The morale of both the teams is high due to consecutive victories. And now that height can be seen in the final clash between them.