What is the difference between the coaching of Ravi Shastri and Rahul Dravid? Shikhar Dhawan replied with these qualities 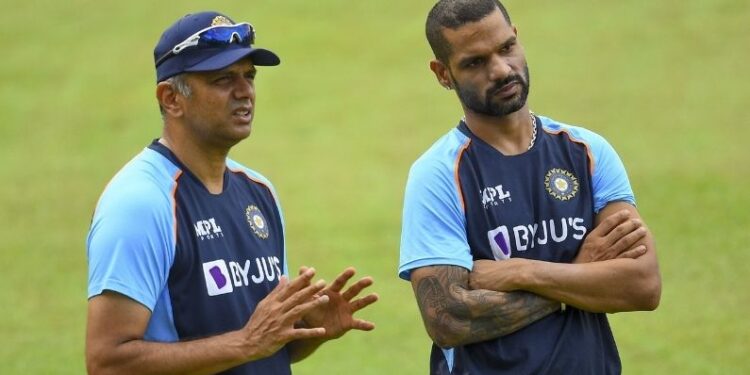 Ravi Shastri has been the coach of the Indian team since 2017 and this is his second stint with Team India, while Rahul Dravid, who was the coach of the junior team, is in this role for the first time with the senior team.

Rahul Dravid and Shikhar Dhawan are taking charge of the Indian team for the first time. (Photo: BCCI)

Team India is starting the ODI series against Sri Lanka from Sunday 18 July. This series can be seen as the foundation of a new chapter and future in Indian cricket, because for the first time two different teams of India will be present in two countries for a series of different formats at the same time. Under the captaincy of Shikhar Dhawan, the Indian team is entering this series and Rahul Dravid (Rahul Dravid) is taking charge of the team as a coach, whom many Indian fans regularly replace the current coach Ravi Shastri. Would love to see him in this role. Dhawan is one of the few players who have got a chance to work with both the legends. In such a situation, Dhawan has also explained the difference between the two.

In the virtual press conference before the start of the series against Sri Lanka, Dhawan talked about the strengths and different abilities of both the coaches. Dhawan described both the coaches as positive and energetic. Dhawan said, “They both have their own strengths and both are very positive people. I have spent a lot of time with Ravi bhai and he has a different way of encouraging him. Ravi bhai’s energy is very strong, while Rahul bhai is very calm, restrained and strong too. Everyone has their own way and I enjoy playing under them both.”

Dravid will be the coach of Team India?

Ravi Shastri has been the coach of the Indian team since 2017 and this is his second stint with Team India. Shastri’s tenure ends after the ICC T20 World Cup in November 2021 and there is speculation that Dravid may get the responsibility of Team India. Dravid, who has handled India’s Under-19 and A team, is becoming part of a series for the first time as the coach of the senior team. Whether Dravid will become the coach next, it will be clear in a few months, but through this series, Indian fans will definitely get a glimpse of his style.

Also read: IND vs SL: Dhawan will execute the special mission of Kohli-Shastri, will hit two targets with one arrow in Sri Lanka