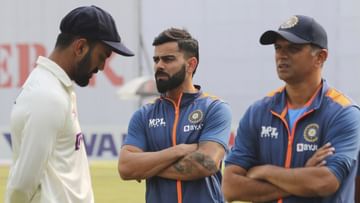 After the ICC T20 World Cup, Virat Kohli, Rohit Sharma and KL Rahul have not played a single T20 match for the country and that is why speculations were being made that their T20 career is over.

After the ICC T20 World Cup, Indian cricket team’s legendary players – Virat Kohli, Rohit Sharma have not played any T20 match. There were speculations about this that these players have been dropped from the T20 team. Team India’s head coach Rahul Dravid, however, has now cleared the situation on this. The ICC has given Kohli a place in its T20 team of the year on Monday itself. Dravid has said that Kohli, Rohit have been rested from the T20 squad as the team management is prioritizing white ball tournaments and one of the reasons is the ODI World Cup to be held in India this year.

According to the new policy of the Board of Control for Cricket in India (BCCI), during this year’s IPL, the National Cricket Academy (NCA) and franchises will monitor the workload of key players in view of the 50-over World Cup to be held on home soil in October-November. .

break given to players

The Indian team is currently participating in the three-match ODI series against New Zealand. In this series, Team India has taken an unassailable 2-0 lead and will enter the Holkar Stadium in Indore on Tuesday with the intention of making a clean sweep. Before this match, Dravid said in a press conference on Monday in response to the question of news agency PTI, workload management has become a part of the game today. We keep reviewing these things. We had given break to some players (Rohit, Virat, Lokesh Rahul) during the T20 series as per workload management.

Injury management and workload management are two different things. Looking at the amount of cricket we are playing, there has to be a balance between the two as to what is the priority for us in the near future. Also, it has to be ensured that our big players are available for big tournaments.

These players will play IPL

Dravid said that players included in the plans for the ODI World Cup will play in the IPL as it will help them assess their T20 skills. He said, in the case of IPL, the NCA and our medical team will be in constant touch with the franchisees and if there is any issue or injury, we will join them. If a player is injured or there is any other concern, then of course I think the BCCI has the right to take them out (from the tournament).

Dravid said, but if he is fit then we will release him for IPL as it is an important tournament. It is a huge tournament for the BCCI, considering our preparations for the 2024 T20 World Cup.”

This is why the break

Kohli, skipper Rohit and Lokesh Rahul have not played any T20 matches after the T20 World Cup in Australia and will also miss the T20 series against New Zealand next week. But Dravid believes that the break is necessary before the two-week camp ahead of the crucial Test series against Australia starting next month. He said, you need to play some white ball tournaments in a given time. It is important to play four matches of the Border-Gavaskar Trophy for possible WTC qualification.