VIDEO: Shocked by the defeat, the fans of England beat Italy’s supporters with kicks and punches, PM Boris Johnson said in the racial remark case – should be ashamed 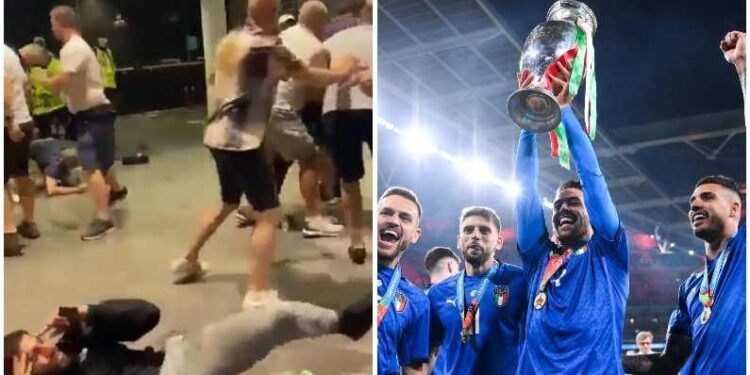 After the final match of Euro 2020, the video of the beating of the fans is going to spoil the image of England all over the world.

After the Euro 2020 final, England’s supporters beat up Italy’s fans

By making the first place in the final of the European Championship (Euro 2020), the team of England had won everyone’s heart in the same way. The result of his brilliant game in the final was that the match reached the penalty shootout. But, this is only one side of the coin. For a team, its fans are equally important. But, the action of the England fans during and after the final match of Euro 2020 was very embarrassing. It has done a kind of stain on England’s accolades. He has done work to damage his image.

Actually, on the one hand, England won the hearts of everyone with its performance, while on the other hand, its fans were constantly seen doing petty acts. He abused the players on the penalty miss of England. England’s Prime Minister Boris Johnson also condemned the racial remarks made by football fans. He tweeted, “Those responsible for such lousy misbehavior should be ashamed of themselves. ”

This England team deserve to be lauded as heroes, not racially abused on social media.

Those responsible for this appalling abuse should be ashamed of themselves.

In the final, England’s Marcus Rashford hit the goal post while Bukayo Saka and Jaden Sancho’s penalties were blocked by Italy’s goalkeeper. All three players faced racial abuse on social media for this. London Police has also condemned this and has asked to investigate social media posts. Not only this, fans of England were also seen hooting the national anthem of Italy. But, the extent was reached when he could not digest the defeat in the final and clashed with the supporters of Italy.

The hooliganism of the England fans after the Euro 2020 final

After the end of the match at Wembley Stadium in London, there was a lot of hooliganism from the fans of England. A video of this is also becoming increasingly viral. It is clearly visible in the video how the supporters of England ambushed are kicking and punching the Italian fans coming out from inside the stadium. They are seen washing them like animals. Seeing the large crowd of supporters of England, the Italian fans are seen running after just saving their lives in the video.

The English team has won hearts but their fans (or a section of them) have been an absolute disgrace. Online racist abuse of their players who missed penalties, booing the opponents national anthem and downright hooliganism against Italian fans .. shameful. 👇 pic.twitter.com/o768lQNfKu

Fans did the work of pushing the image of England!

After the final match of Euro 2020, this video is not only embarrassing but it is also going to tarnish the image of England all over the world. England, who reached the final of the tournament for the first time, were defeated by the Italian team 3-2 in the penalty shoot-out. This is the second time that Italy has become the champion of this tournament. Earlier, he won this title for the first time in 1968.

Also read: Euro 2020: Nawab who became the goal on goal, his team’s dream was broken, see the complete list of top scorers of the tournament