Video: Career was considered over, dropped from the team, now 31 runs scored in one over 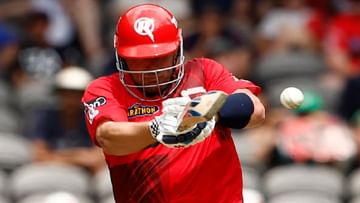 Aaron Finch of Australia showed that despite being out of the team, the edge of his bat has not diminished. Even injury cannot end his career.

2,4,4,2,7,6,6… This is the score of the bowler’s thrashing in one over and this thrashing was done by the batsman whose career was considered to be over. Not only this, he was also thrown out of the team, but now after hitting 31 runs in one over, that batsman had replied that the edge of the bat has not diminished. Aaron Finch badly washes Andrew Tye in the Big Bash League match. However, despite this, he could not win his team. Australian star Finch is captaining the Melbourne Renegades.

In the 52nd match of the league, he thrashed the bowlers of Perth Scorchers fiercely. In one over of Andrew Tye, he created a ruckus. Chasing the target of 213 runs, Melbourne needed 68 runs in the last 3 overs.

Most expensive over of the league

Andrew Tye came on the attack in the 18th over. Aaron Finch was on strike. Finch added 2 runs on the first ball of the over. On the next 2 balls, he hit 2 consecutive fours. Finch added 2 more runs on the fourth ball. Ty had bowled 4 balls of his over, but his real beating was yet to happen. He had come under pressure and due to this he threw the 5th ball of the over no ball. Finch did not stop even on this no ball. Put an upper cut on the full toss and hit a six. He hit another six on the free hit and ended Ty’s over with a six as well. This over of the tie became the most expensive over of the league.

Finch out of Australian team

Finch hit 31 runs in this one over. Shocked by this beating, Tye also left Sutherland’s catch on the very next ball of Aaron Hardy. Finch scored an unbeaten 76 off 35 balls. In this stormy innings, he hit 7 fours and 5 sixes. However, despite this, he could not win his team. Melbourne’s team could only manage 202 runs for 5 wickets in 20 overs and lost the match by 10 runs. Finch had retired from ODI cricket last year. He also led the Australian team in the T20 World Cup, but he got injured in the middle of the tournament, after which his career was considered over. After this, he was dropped from the team in the next match against Afghanistan and till now he could not return to the Australian team.