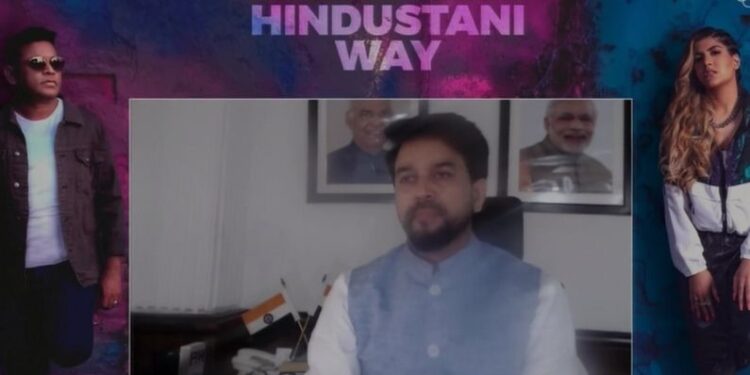 Launching this song, Anurag Thakur said, “I want every Indian to listen, share and cheer for India. I thank Ananya and AR Rahman for taking the initiative.”

“Let me thank Ananya & AR Rahman for taking the initiative. I want every Indian to listen to it, share and cheer for India,” he says. pic.twitter.com/heRmsr5k8K

126 players will participate in 18 sports

This game was to be held last year but due to Corona it was postponed for a year. Now this game is going to start from 23rd July. Hockey captain Manpreet Singh and London Olympics bronze medalist boxer MC Mary Kom will be India’s flag bearers during the opening ceremony. Top wrestler Bajrang Punia has been made the country’s flag bearer for the closing ceremony to be held on August 8.

PM Modi spoke to the players

Earlier on Tuesday, Prime Minister Narendra Modi addressed and encouraged all the Indian athletes participating in the Tokyo Olympics. Along with the players, their families also participated in this program organized through video conferencing. PM Modi spoke to all the players one by one and encouraged them. The players whom PM Modi spoke to included many names like Mary Kom, Sania Mirza, Deepika Kumari and Neeraj Chopra. During this, PM Modi told the players that you do not need to be burdened with expectations, you just give your 100%. Union Sports Minister Anurag Thakur was also present in this program.