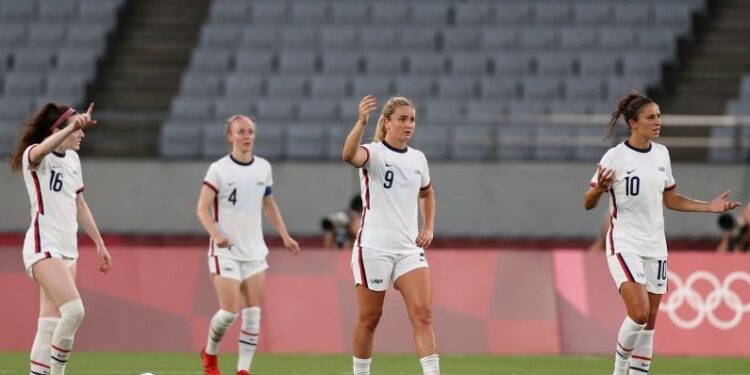 The event of the women’s football team started two days before the opening ceremony of the Tokyo Olympics. Eight matches are to be played on the first day of the event.

After the soft ball on Tuesday at the Tokyo Olympics, women’s football matches also started on Wednesday. On the very first day, the fans got to see a big upset when Sweden defeated a strong team like America 3-0. 6 matches were to be played on the first day of the event, out of which three have been completed.

America lost in the first match

America did not have a good start in the Tokyo Olympics. This team, the world champion, faced a 0-3 defeat against Sweden in their first match of the Tokyo Olympics. Sweden showed a strong game and scored three goals in the match. Blackstenius scored two goals and Lina Hertig scored one goal for Sweden. Sweden suffered a 3-0 defeat for the first time since 2017. This was America’s first defeat after 44 matches, which is being seen as a big upset.

Two goals from Ellen White helped Britain register a 2-0 win over Chile in the Olympic women’s football event on Wednesday. White gave the team the lead in the 18th minute and then doubled the lead in the 75th minute. The team of Chile, ranked 37th in the world ranking, is participating in the Olympics for the first time. Apart from England, this team of Britain includes players from Scotland, Wales and Northern Ireland. Earlier, the UK team participated in the 2012 Olympics.

Marta’s two goals helped Brazil beat China 5-0 in the women’s football competition of the Tokyo Olympics on Wednesday. Marta thus became the first player to score in five consecutive Olympics. Apart from world ranked seventh player Marta, Debinha, Andreessa Alves and Beatriz also scored. Six-time FIFA ‘Player of the Year’ Marta has scored 111 international goals, the most for a Brazilian male or female player, with Debinha leading Brazil 2–0 in the 22nd minute after his goal in the ninth minute. done. Marta scored her second goal in the 74th minute. Alves then scored on a penalty and Beatriz scored in the 89th minute.

Tokyo Olympics 2020: Playing with 6 Polish swimmers, returned from Japan due to federation’s mistake