Tokyo Olympics 2020: The first batch of Indian players left in the hope of medals, Sports Minister gave a special farewell 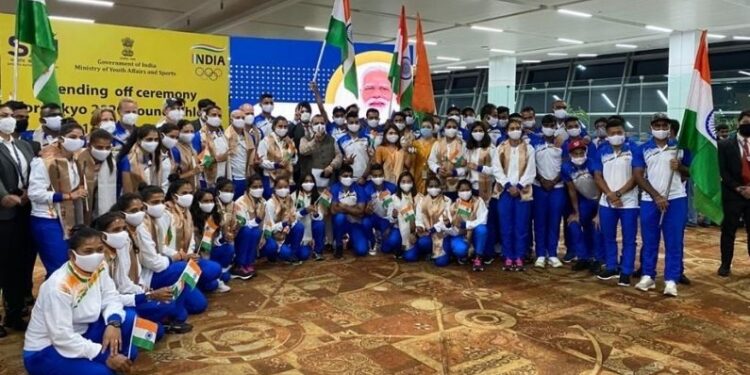 This time India is sending its largest contingent to the Tokyo Olympics, in which 228 members including 119 players are present. Many players have already reached Tokyo.

This time 119 athletes are participating in the Olympics from India. (Photo: Twitter/SAI)

Dreams in eyes, passion in heart, edge in preparations and above all the weight of hopes of 130 crore Indians. With all this, India’s best athletes went to the Tokyo Olympics 2020 to hoist the tricolor. A large and first batch of Indian athletes and support staff left for Tokyo from the Indira Gandhi International Airport (IGI Airport) in the capital New Delhi on the evening of Saturday 17 July. A special farewell ceremony was organized at the airport, in which the players were sent to Tokyo in the presence of Indian Olympic Association (IOA) officials including Sports Minister Anurag Thakur.

The players were accorded a warm welcome before this event at IGI Airport. A red carpet was laid for the players and the staff present at the airport raised the spirits of the players by clapping. During this, apart from Sports Minister Anurag Thakur, Minister of State for Sports Nisith Pramanik, Director General of Sports Authority of India (SAI) Sandeep Pradhan and Indian Olympic Association (IOA) President Narinder Batra and Secretary General Rajeev Mehta along with other officials were involved. Were.

88 people including 54 players left for 8 games

In the first batch, a total of 88 members, including 54 athletes, left for Tokyo. Some players from India have already reached or left Tokyo from different places, but the first batch left from India only on Saturday. This includes athletes from 8 sports and members of the support staff. This includes both men’s and women’s hockey teams, players and associate members from archery, badminton, table tennis, judo, gymnastics, swimming and weightlifting. This time a team of 228 people from India is going for the Olympics, which includes 119 players.

Here are few glimpses from the send-off ceremony pic.twitter.com/HvwkSi3cSY

India’s 🇮🇳best are all set to conquer the world at #Tokyo2020 !

Wishing our brilliant athletes the very best! The pulse of 130 crore Indians is racing!
All eyes on you.
Get Set Go!#Cheer4India

Apart from these players, many players from India training abroad have reached Tokyo. The Indian sailing team, along with Varun Thakkar, Ganapati Chengappa, Vishnu Saravanan, Netra Kumanan, was the first to reach Tokyo. On Saturday morning, 15 shooters reached Tokyo directly from Croatia. On the other hand, top weightlifter and medal hopeful Mirabai Chanu had reached Tokyo from her training center in the US on Friday itself. National coach Vijay Sharma and assistant coach Sandeep Kumar have also accompanied him to Tokyo. Another assistant coach of Chanu, Pramod Sharma, left for Delhi with the first batch. Apart from these, a team of Indian boxers has also left for Tokyo from Italy, which will set foot in Tokyo on the morning of Sunday 18 July via Amsterdam.